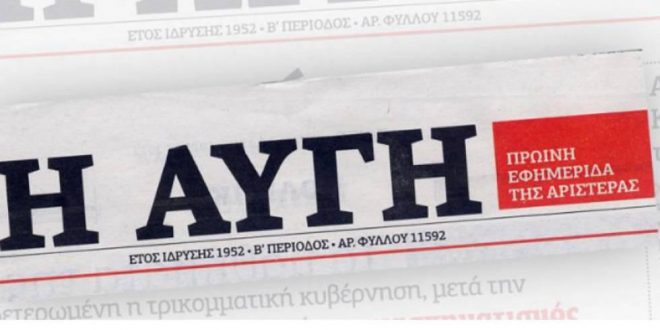 The historic newspaper of the Greek left, Avgi,will hold its daily edition after 70 years. The newspaper has apparently fallen victim to financial problems as other daily newspapers in the recent past due to changes in the landscape of printed media and readers habits.

Its director posted on social media on Wednesday that he resigns as he did not manage to increase the number of subscribers.

Like other historic newspapers ToVima and Ethnos, also Avgi will keep its printed Sunday edition and its website.

The newspaper Avgi was “born” in the heart of post civil war Greece and its first edition went public on August 24, 1952 as the rival to Rizospastis, the newspaper of Communist party KKE that it was not published regularly. Avgi was the party organ of “moderate” left-wing, of the United Democratic Left (EDA) and later to KKE-internal.

The historic daily morning newspaper has always expressed positions in favor of the Left since 1991 and later the official views of the Left Coalition and its successor, SYRIZA – Progressive Alliance.

SYRIZA reportedly owns 40% of the shares and the rest is in the hands of small shareholders, such as its employees, its readers and party voters. None of them has more than 3% of the shares.

Last month, Avgi initiated a program of ‘voluntary exit’ for its 30 employees. The offer was more than generous with 28 salaries plus the payment of unpaid wages from previous years. Only 11 employees have reportedly responded positive to the offer.

Closing the daily edition will certainly have also a political impact for the country’s main opposition party SYRIZA.

Some party officials are said to consider the timing of the closure as very bad just a few weeks ahead of the SYRIZA convention and given the fact that New Democracy and PM Mitsotakis have a “monopoly” in the mainstream media.

An extraordinary meeting with Alexis Tsipras is scheduled on Wednesday, while employees of Avgi are up in arms and prepare to mobilize.

At an emergency meeting on Thursday, the political council of SYRIZA decided that the daily printed edition will continue, however, with a new business plan where the lay-off of some of the 70 employees and 10 freelancers in total would be inevitable.