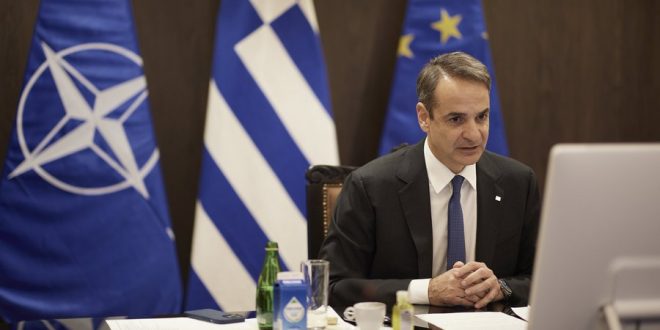 Greece backs tough sanctions against Russia over Ukraine attack, including SWIFT ban, and is preparing to send medical aid that is scheduled to leave the country today, media report.

Just spoke with President @ZelenskyyUa. Full support and solidarity to Ukraine and its people in these tragic moments.

Greece has from the beginning supported tough sanctions against Russia for this blatant violation of international legality.

The Prime Minister said also that “our diplomatic missions in Odessa and Mariupol remain open also as a sign of solidarity to Ukraine.”

Government sources said that Mitsotakis expressed Greece’s support for stricter European Union sanctions on Russia, and said he was prepared to provide assistance to Ukraine in any sectors it requests.

The sources said Zelensky thanked Mitsotakis for Greece’s stance and his personal one on behalf of the Ukraine, and called for continued support within the EU framework.

The Ministry of Health is reportedly preparing shipment of medical supplies.

Earlier, Mitsotakis had an extensive collaboration with Foreign Affairs Minister Nikos Dendias. He also spoke with the Greek Ambassador in Ukraine.

Government sources said that they agreed to remain fully coordinated at EU level to provide any assistance necessary to Ukraine and President Volodymyr Zelensky.