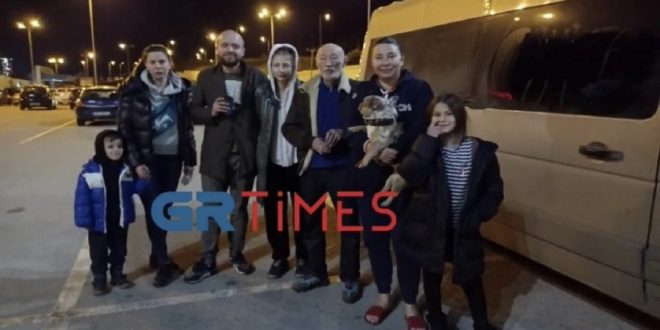 The first refugees from Ukraine arrived in Thessaloniki early Sunday morning, seeking refuge from Putin’s bombs. The family from Vinnytsia in north-central Ukraine needed 66 hours drive to reach the city in northern Greece where they made a short stop before continuing their journey to their final destination: a town near Thessaloniki where they have friends who offered to host them until the war is over.

Refugees in Greece: On board of the van are the couple Arina and  Vladimir, their two adult daughters, Alexandra and Nicole, their two grandchildren aged 5 and 9 as well as four dogs and one turtle.

51-year-old Arina told local media grtimes about their adventure to reach a safe country away from the war.

It was 4 a.m. on Feb. 24 when Arina’s phone rang. “Putin hit us,” she was informed. “I literally jumped in the van with my husband, put the camera in front of me and started going to pick up my children, to leave everything behind to escape the bombs,” she told GRTimes still in shock.

It was this moment that determined the future of the Piodkovskassi family, that unexpectedly turned her into part of the new refugee wave in Europe.

The moment of an “Odyssey” that started for them so unexpectedly, as they say.

“We did not expect Putin to hit us. We live in the 21st century. Who expected him to invade another country?”

“Greece is one way street for us”

Arena, her husband Vladimir, her two daughters, Alexandra and Nicole, her two grandchildren, 5-year-old David and 9-year-old Sofia, along with four dogs and a turtle are stacked in a van for 66 hours. Their destination is the town of  Aridea in ​​Pella, where the family has friends.

“We have been coming to Greece for years “, said Arina, owner of a kennel in Vinitsa.

“Our friends were kind enough to suggest us to host us for as long as needed. For us, Greece and Pella were the only way”, she added.

Queue of 50 km at the border, without money and fuel

The exhausted family made a stop over in Thessaloniki, before continuing on to their final destination, in Aridea.

“We are really exhausted, but also so relieved that we are safe now,” Alexandra told GRTimes.

Her mother added “We fought hard to cross the border. In addition, we were anxious about the fate of relatives and friends  we left behind “.

“In fact, we left without money, since the amount of transactions was blocked, gasoline was minimal and the only hope for us was to leave through the borders.”

“On the border with Moldova, where we finally passed, the vehicles had formed a queue, 50 kilometers long. There were pedestrians waiting all night to cross. It was shocking,” Arina described with an trembling voice.

Their journey to their final destination, Aridea, is coming to an end. 9-year-old Sofia is almost asleep in the van, while 5-year-old David, took the opportunity to run for a while in the parking lot where they have stopped.

“Are we arriving?” he asked his mother with a question in his eyes… “The children are exhausted. All they want is to eat a hot meal and sleep,” explained Alexandra.

Tomorrow is uncertain for all of them.

“We know nothing. How long will we stay in Greece, how long will the war last. When will we see our people again who every once in a while they run to the shelters.”, Arina said lowering her eyes.

In the end she declared that she is “proud of our president, Zelensky. He was always honest and now he is in the country, next to everyone. He did not lie and he never left us .. ”