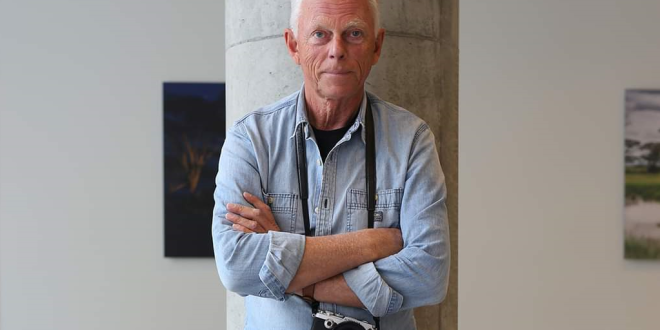 In a brief statement, the Norwegian Embassy in Athens said the we were aware of the arrest of a Norwegian citizen on Lesbos and it was offering assistance according to the consular framework.

Bry was reportedly arrested while he was shooting pictures for his next photo album about the landscapes of Lesvos.

According to local media stonisi, he was arrested for taking pictures of the Greek Coast Guard and Navy vessels.

Citing Coast Guard sources the local news website notes that the vessels were on the pictures he shot. During a search in his home in the presence of a judicial representative, electronic archives with pictures were seized, and are now under examination.

“He has been referred to the First Instance prosecutor of Mytilene with heavy felony charges for espionage and received 24 hours to prepare his testimony,” stonisi reports.” He will testify on Friday.

According to the local news website, the photographer has given his consent for the publication of his name.

During the Refugee Crisis, he was a volunteer and joined the Lesvos Solidarity group since 2016.

LesvosSolidarity and a human rights group indicated that Bry was arrested for volunteering in the Refugees group.

#Greece: According to @Lesvosolidarity, the famous Norwegian photographer Knut Bry was arrested yesterday, while shooting pictures for his next book, on the charge of espionage! Probably because he's volunteering on #Lesvos, supporting #RefugeesGr!https://t.co/WJkZumbvux pic.twitter.com/OjY7EHDhAm

Meanwhile, locals posted on social media the port is commercial and there is no sign forbidding taking pictures there and that every local shoots pictures in the area.

75-year-old Knut Bry is one of Norway’s most acclaimed photographers, internationally renowned in several genres from fashion and hewelry , to food and nature. He has received many awards during his career that extends over several decades.

He is reportedly also the creator of three luxury albums about Lesvos, cooking and nature that are released in collaboration with the Norwegian Study Center Metochi, advertising the island worldwide.