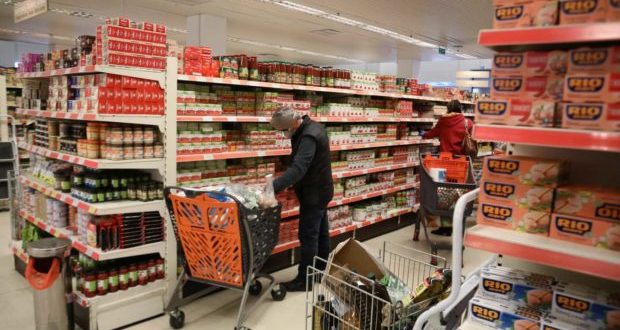 Greece has enough stocks in flour, cereals and vegetable oils “for months ahead”, Development Minister Adonis Georgiadis reassured the Palriament,  while introducing a new stock registry for food and farming supplies.

Speaking of the draft amendment for the registry, Georgiadis said it would provide the government with quick sense of key supplies, in view of supply chain disruptions due to the war in Ukraine.

“We do not want to allow some people to create a fake shortage and make a fortune out of it, either through black marketeering or by artificially raising prices, more than is justified by the global crisis,” the minister said.

He clarified that the registry does not mean a shortage of these products adding that stock recording has been already done in supermarkets.

“There are enough supplies pf all these products for months ahead. There is no reason to panic,” he said.

The amendment will oblige businesses along the entire supply chain, from production and importing to selling, distributing and storage, to record all raw materials for the production of fertilizers, to fertilizers themselves, animal feed, raw cereals, any sorts of flour, sunflower seeds, and vegetable oils (except olive oil).

The Finance Ministry amendment will give businesses 48 hours after the legislation publication  to fill out the registry, through the development ministry’s platform that connects to the public administration’s gateway.

Failure to comply or giving false data will result in confiscation of products and fines ranging from 1,000 to 100,000 euros.

As flour and sunflower oil are the basic products next to energy, mostly affected by the war in Ukraine, some supermarkets in Greece have already a cap on purchases in order to avoid shortages and subsequent price increases.

So far the measure is being described as “purely precautionary” and has been reportedly implemented in online supermarkets, while it is expected to be extended also to normal ones.

However, the purchase restrictions are different from one store to another.

A large chain has already expanded the measure in its physical stores only for sunflower oil, allowing its customers to purchase up to four pieces in 1- or 2-liter bottles and one piece in the 5-liter package.

At least one big supermarket has limited the purchase of all uses flour up to three 1-kilo packages per consumer for purchases online. The cap for sunflower oil is up to three bottles.

Another online supermarket store has restricted the purchase of sunflower oil to up  4 packages per consumer.

The Development Minister said a few days ago that he has asked the creation of online platforms specifically for these two products so that the stocks are being registered.

It is noted that the government gave the companies 48 hours to record the food and agricultural products they have.

The Development Ministry has started screening to combat profiteering and already fined several businesses for selling products for a profit higher than allowed.

Among the 48 businesses fined from the start of 2022 until March 24 are fuel stations, supermarkets, wholesalers of fruit and vegetables, fresh and frozen meat but also diagnostic centers, pharmacies and doctor’s offices who charged a Covid-19 test much higher than the official price.

PS From what I hear some Greeks rushed to stock sunflower oil and flour, now that are plenty and affordable. However, what’s the purpose of having a stock if you can’t afford the electricity or gas prices to turn them into eatable food?