Greece has declared 12 Russian diplomats persona non gratae, the Foreign Ministry announced on Wednesday. The Russian diplomats will have to leave the country. The ministry’s secretary general has informed about this decision the ambassador of the Russian Federation in Athens “earlier today,” the ministry said in a statement.

According to the statement, authorities declared 12 members of the Diplomatic and Consular Missions of the Russian Federation, accredited in Greece, as personae non gratae.

In diplomacy, a persona non grata – Latin: “person not welcome” – is a status applied by a host country to foreign diplomats to remove their protection of diplomatic immunity from arrest and other types of prosecution.

Under Article 9 of the Vienna Convention on Diplomatic Relations, a receiving state may “at any time and without having to explain its decision” declare any member of a diplomatic staff persona non grata. A person so declared is considered unacceptable and is usually recalled to his or her home nation.

Greece is the latest of several European Union countries to expel Russian diplomats. This practice of the recent days is done with the characterization of “activity that is not in line with their diplomatic capacity.” 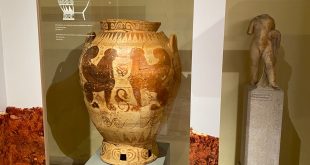