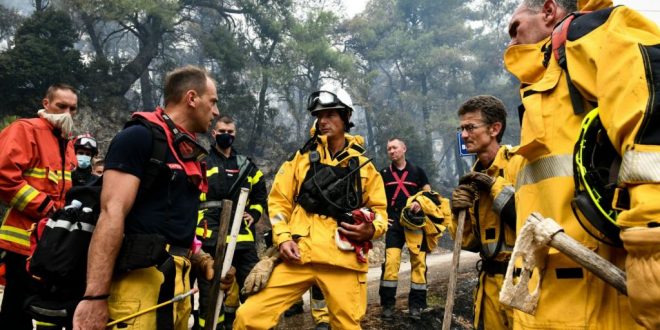 May 26, 2022 FEATURED, Greece, Politics Comments Off on Firefighters from 6 European countries to be deployed in Greece 3,506 Views

Advance detachments of firefighters from six European countries – Bulgaria, Romania, Germany, France, Finland and Norway – will arrive in the country ahead of the fire season, a high-level meeting in Athens decided on Thursday.

These units, which will be based in Athens, Larissa and Tripoli, are being funded by the European Commission.

The working meeting at the Ministry of Climate Crisis and Civil Protection decided that the armed forces will have the prime responsibility for manning ground patrols to prevent forest fires, thus freeing up members of the fire service and police.

The meeting, which was attended by Prime Minister Kyriakos Mitsotakis, agreed to step up air surveillance with single engine Air Tractor and PZL aircraft in areas with a fire risk level of 4 or 5.

It was also announced that a dedicated fire service unit for fighting forest fires will have a total strength of 590 officers, 90 of whom have received specialized training.

The meeting also heard that municipalities have been given the power to clear land where owners are negligent or unknown.

For the first time, civil protection evacuation procedures are being drawn up for high-risk areas in tourist spots as well as archaeological sites. [kathimerini, tvstagr & others]