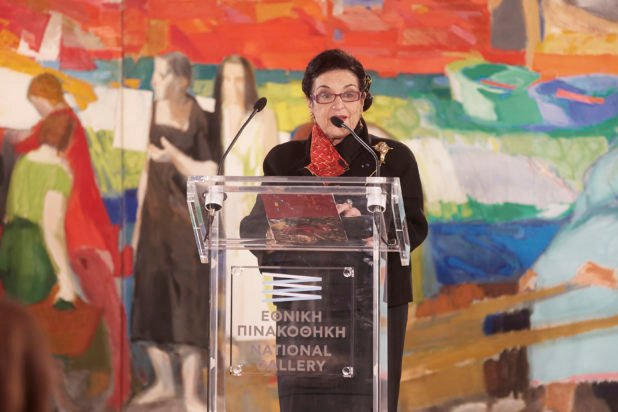 Marina Lambraki-Plaka, the long standing director of the National Gallery in Athens, passed away in hospital on Monday at the age of 83. Having served at this post for 30 years, she was called the “Iron Lady” of the Greek Arts.

Two days ago, she was reportedly submitted to a hospital with some health issues. She passed away on Monday morning.

Her death has been unexpected. She had even scheduled a press conference on June 15 to present the big exhibition for Greek painter Konstantinos Parthenis which has was preparing for several years and with a  big dedication.

Marina Lambraki-Plaka was an art historian, archaeologist and professor emeritus of Art History at the School of Fine Arts.

She served as the director of the National Gallery since 1992 and as deputy minister of culture in the caretaker government of 2015.

She was born in Arkalochori, Crete, in 1939 and studied at the Department of History and Archeology of the University of Athens and continued with postgraduate studies in Classical Archeology on the subject of “Prosocratic Philosophy and Art.”

She then completed postgraduate studies in History and Sociology of Art at the Sorbonne University and in 1973 he received a state doctoral diploma.

In 1975 she was elected professor at the Chair of Art History of the Athens School of Fine Arts.

During her tenure as president of the National Gallery, the museum expanded with new branches in Corfu, Nafplio, and the Sculpture Gallery in Goudi, 3,000 new works were acquired, including two paintings by Domenikos Theotokopoulos (El Greco) and important exhibitions of foreign and Greek artists were organized.

Lambraki-Plaka’s death has shocked the culture and the political world in the country.

“We owe her a big thank you for the dedication, creativity and love she showed all these years in the Gallery, in Art, in Greece,” Culture Minister Lina Mendoni said in a statement.

The President of the Hellenic Republic, the Prime Minister, the Foreign Minister, high and lower ranking politicians, they all posted condolences messages on their social media accounts.