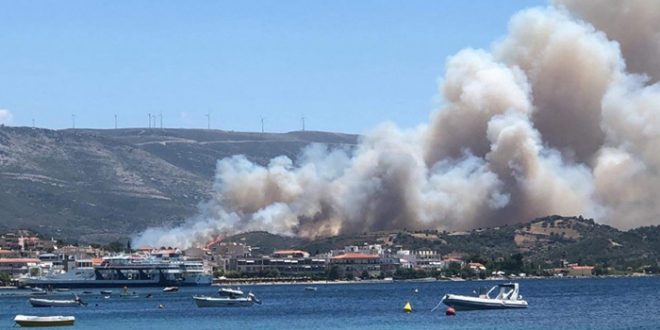 Climate Change: Temperatures in Greece expected to rise by up 5° Celsius

July 9, 2022 environment, FEATURED Comments Off on Climate Change: Temperatures in Greece expected to rise by up 5° Celsius 1,104 Views

Temperatures in Greece are expected to rise by up to 5 degrees Celsius by the end of the century, scientists warn basing their studies on climate models projections.

“The climate models tell us that depending on the measures we take, we will have an increase in temperature that will reach levels of the order of 4.5 – 5 degrees Celsius, which is an extremely difficult condition,” said Professor Nikos Michalopoulos, Director of the Institute for Environmental Research and Sustainable Development (IERSD) of the National Observatory of Athens.

Speaking at the event for the National Network on Climate Change – Climpact, Michalopoulos stressed “the intermediate scenario can reach an increase of 2 – 2.5 degrees Celsius, however, we are almost already at 2°C higher in Athens” compared to the past.

Various climate projection models, and depending on the measures that will be taken to mitigate the effects of climate change, show that average temperatures for the period 2071-2100 in Greece could rise by as much as 4.5-5 degrees over those in the period 1961-1990.

Presenting some of the results of the White Paper and the first phase of Climpact, Michalopoulos emphasized that the Mediterranean is heading full speed into a future climate that will be warmer and drier, which will also have significant effects on agriculture.

The Eastern Mediterranean is one of climate change hotspots: while global temperatures rose 0.7 degrees Celsius from 1980-2010, they rose 1.5 degrees in the area.

In addition, there has been a significant increase in the number of heatwave days over the last 30 years as heatwaves are now estimated to occupy about 35 days per year, while frost days are considerably reduced. At the same time, rainfall is now more intense, while severe weather events related to rainfall have almost tripled in the last 20 years.

Days with extreme temperatures (over 37C) have risen significantly since the 1960s and, while precipitation in Greece may have been stable, or even risen slightly, it is concentrated in fewer days, which means more extreme precipitation phenomena and an inability of the soil to absorb these volumes of water, with a negative impact on agriculture.

Areas where water is already scarce, such as the Eastern Peloponnese and Eastern Crete, will see even less rain in coming decades, Michalopoulos warned.

Daily ethnos.gr noted that the full results of the Climpact White Paper are expected at the end of 2022.

It is not the first time and it will not be the last, scientists warn about the vulnerability of the Eastern Mediterranean Sea in general and in Greece in particular. – Check KTG’s posts on the issue here.

In September 2021, at the EUMed9 Summit-on climate change and the environment in the Mediterranean, EU leaders signed the Athens Declaration expressing their commitment to the implementation of the Paris Agreement, and to reduce the rise of global temperature by 1.5C in relation to pre-industrial levels.

PS I have no idea how much of the Declaration nice and promising wording has been implemented or are about to be implemented, so far.