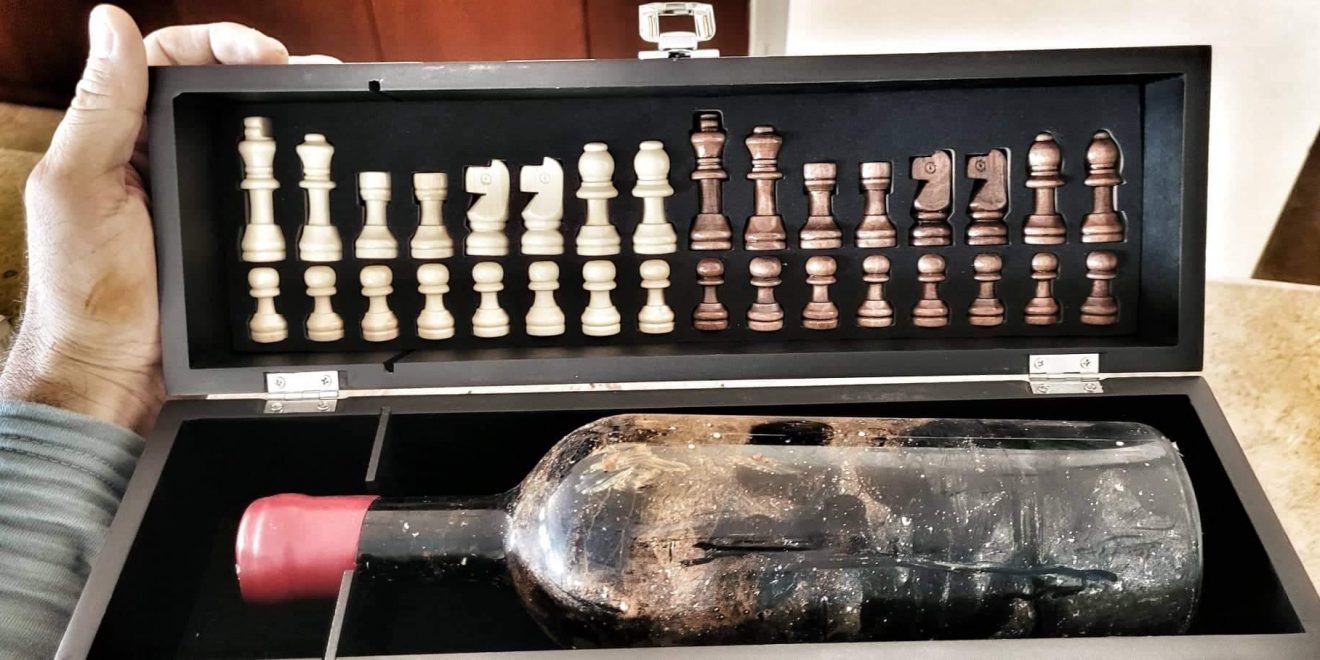 July 17, 2022 Culture, Eat-Drink, FEATURED Comments Off on Wines aging underwater in Halkidiki are a hit in Japan 1,976 Views

Wines aged in the underwater cellar at the bottom of the sea in Halkidiki have landed at restaurant tables in Japan, where they enjoy a huge popularity. Sushi and Greek wine aged underwater, is the new trend in Japan.

The bottles of the underwater cellar from Ierissos, were sunk in the sea at a depth of twenty meters a year ago.which sunk a year ago twenty meters under the sea, were “caught” and have already become popular. with Japan having – after the first test – even made reservations for the next bottles.

This different underwater aging that won over the Japanese, was done from the most sensitive part of a bottle, which is the cork.

When those in charge of the underwater cellar, the “Domaine Agrovision”, submerged the bottles, they chose two type of cork: one with a bigger permeability and one with a smaller one.

Speaking to news agency amna radio 104.9 FM, the director of the winery “Domaine Agrovision” Angelos Zamanis explained how the process was done technically and how the sea finally “entered” the wines.

“From the large porous cork, sodium chloride, salt, i.e. the sea, passed into the bottles, and the wine got salty. The acidity and saltiness matched the white wines very well and produced a very interesting taste. The red wines, on the other hand, kept their freshness and aroma from its fruit and was what “stuck” on the Japanese palate. It makes sense, because they have a lot of tuna and protein in their meals and in their eating habits, so they are excited and looking forward to the next delivery, as they told us,” Zamanis said..

The bottles that patiently waited in the underwater cellar among the marine population not only changed in taste, but also in appearance.

Shells, oysters and other “touches” by the marine population were added on the bottles to beautify their appearance exterior as well.

150 – 200 bottles were initially placed in the underwater cellar. The 100 were already pre-sold before they landed back on land. As a result, the winemakers added more, as the demand by individuals and businesses was high.

It is a group of divers with knowledge of the seabed and its peculiarities who place the bottles in special display cases and have, in fact, created a special experiential experience. the divers are members of the “Ouranoupolis Scuba.”

“The divers also accompany the customers who want to visit the underwater cellar, ” said Thomas Aslanidis, head of the Scuba team and onwer of a hotel that cooperates with the winery. 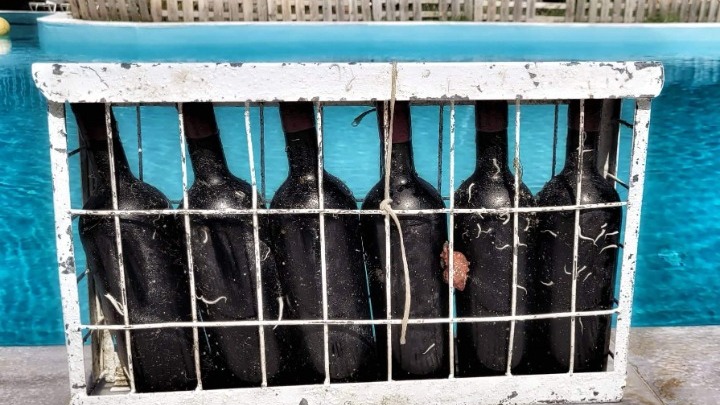 Zamanis reported not only of the underwater aging procedure but also from underwater thieves.”

“The unprecedented happened, four wine bottles were stolen in a depth of 20 meters, a while ago” Zamanis said.

He added that some diver in free diving without equipment cannot reach that depth. He suspected someone snorkeling the area who found them accidental and decided to leave with them.

Since that incident, the winery moved the stock to another underwater area and also placed an underwater security camera that will send alert signals once some sea intruders come close to the cellar.

Since last year, the underwater cellar had also impressed the tourists who are in the area of ​​Ierissos. There were not a few who wanted to dive in to choose their own bottle and taste the wines that “carry” the magic of the crystal clear sea of ​​Mount Athos, the history and legends of the ancient waters and settlements of its area and its canal Xerxes, as the winemakers of the region characteristically say.

Meanwhile, the winery has come to an agreement with the University of Lemnos and the International University of Thessaloniki, so that laboratory analyzes can be done on the body of the wine, to see how its chemical composition has changed. [via portnet.gr]