Deputy director of the British Museum, Jonathan Williams, said that a new “cultural exchange” agreement may be on the cards, stressing that this could be a breakthrough on the deadlock over the Parthenon Marbles. The proposal is that the ancient sculptures will loaned only if they are returned to London

“What we are calling for is an active ‘Parthenon partnership’ with our friends and colleagues in Greece,” he said in an interview with the Sunday Times.

“I firmly believe there is space for a really dynamic and positive conversation within which new ways of working together can be found,” he stressed, noting that the sculptures are an “absolutely integral part of the British Museum.”

According to theartnewspaper.com, crucial is what the British Museum said in a statement:

“We will loan the sculptures, as we do many other objects, to those who wish to display them to other public around the world, provided they will look after them and return them.”

Williams added that “we need to find a way forward around cultural exchange of a level, intensity and dynamism which has not been conceived hitherto. There are many wonderful things we’d be delighted to borrow and lend. It is what we do,” Williams added.

The Sunday Times report said that, in exchange, Greece could lend treasures to the UK.

When the British Museum director, George Osborne, made the proposal on the Parthenon Marbles Partnership in June, however, Greece was not thrilled at all.

Two months later, could there be talks behind closed doors? 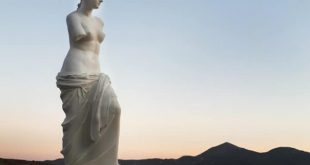 “Venus de Milos” returns to the island albeit as replica