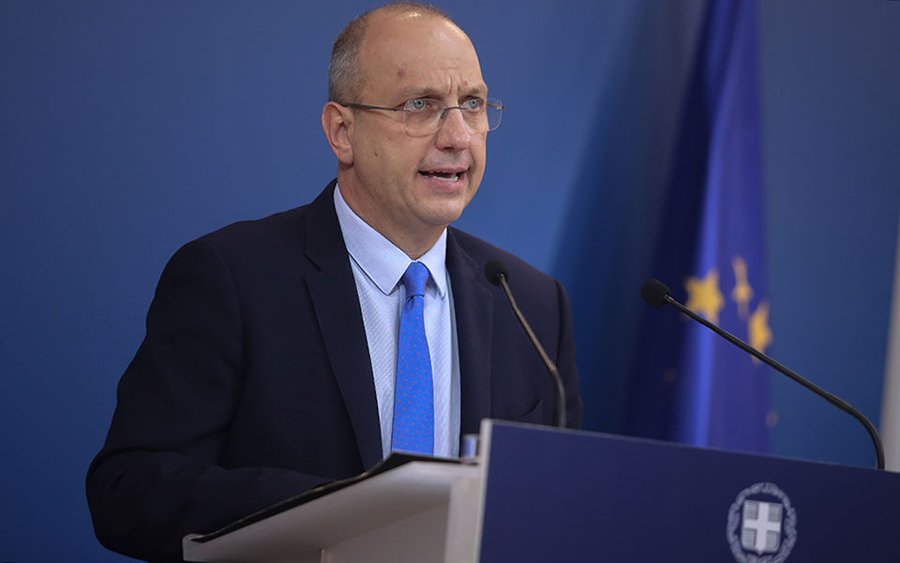 Greece’s government spokesman Giannis Oikonomou spoke out a halfhearted apology for having targeted and discredited the POLITICO correspondent in Greece, Nektaria Stamouli, who is also the president of the Foreign Press Association in the country. Oikonomou could not help but to correct his previous statements after an outcry by local and foreign press associations and by Greeks and foreigners on social media.

Stamouli became the target of the government spokesman who alleged that she “was tied” with main opposition party SYRIZA because she thoroughly reported about the surveillance and wiretapping scandal.

In the eyes of the right-wing ruling New Democracy that is literally obsessed with left-wing SYRIZA, everybody who criticizes the government – even the kiosk-man next door, a notorious KKE-voter, or the far-right baker – for whatever reason is in fact “tied” with the main opposition party. In this sense, the gov’t seems also to believe that such people sound hide in a corner and be silent.

At the briefing to reporters on Thursday, Oikonomou even claimed that POLITICO “reconstructed” critical parts the report.

Oikonomou admitted that his reference to Stamouli a day earlier was “an exaggeration and could have been omitted.”

The spokesman said on Wednesday that a report on the Politico Europe website on the Greek wiretapping scandal was “absolutely inaccurate” and by “a journalist known for her relations with [main opposition] SYRIZA.”

POLITICO’s Playbook published a report by Stamouli, according to which Greece had refused to  respond to European Commission request about the wiretapping scandal in the country claiming that it was just “

The piece, which was written by Politico Brussels Playbook author Suzanne Lynch, mentioned that Nektaria Stamouli had contributed to the report, which regarded the written response of Greece’s permanent representative to the EU to the Commission’s Directorate General for Justice and Consumers on the Predator spyware. Publishing the full letter Greece sent to the Commission, only confirmed Stamouli’s report.

And the whole letter by Greek authorities to the EU Commission exactly as quoted today at Playbook @POLITICOEurope https://t.co/5EkKyWGdIg pic.twitter.com/yCisYE2esF

The representative association for the country’s Foreign Press correspondents has expressed its “surprise and disappointment” at the “targeting and professional discrediting of a journalist” by government spokesperson Giannis Oikonomou.

The Foreign Press Association was responding to a claim made earlier by Oikonomou that a report on the Politico Europe website on the Greek wiretapping scandal was “absolutely inaccurate” and by “a journalist known for her relations with [main opposition] SYRIZA.”

The piece, which was written by Politico Brussels Playbook author Suzanne Lynch, mentioned that Nektaria Stamouli had contributed to the report, which regarded the written response of Greece’s permanent representative to the EU to the Commission’s Directorate General for Justice and Consumers on the Predator spyware.

Ιn a statement issued short after Oikonomou accusations, the FPA said it considered it “inappropriate for a minister in an EU country, and in particular the one responsible for the media and the press, to publicly target and professionally discredit a journalist.”

Our global network urges the gov spokesperson to apologise for his unacceptable insinuations.@MediaFreedomEU alert👇https://t.co/q44Mtboegt pic.twitter.com/feaVOjhbXt

POLITICO said also in a statement that is “stands by the accuracy and integrity of Nektaria Stamouli’s journalism.”

“In response to the substance of the complaint, we have reviewed the letter from Greece’s Permanent Representative to the EU Ioannis Vrailas and are satisfied that Stamouli’s citations from it in Wednesday’s edition of Brussels Playbook are entirely accurate,” the Politico stressed. 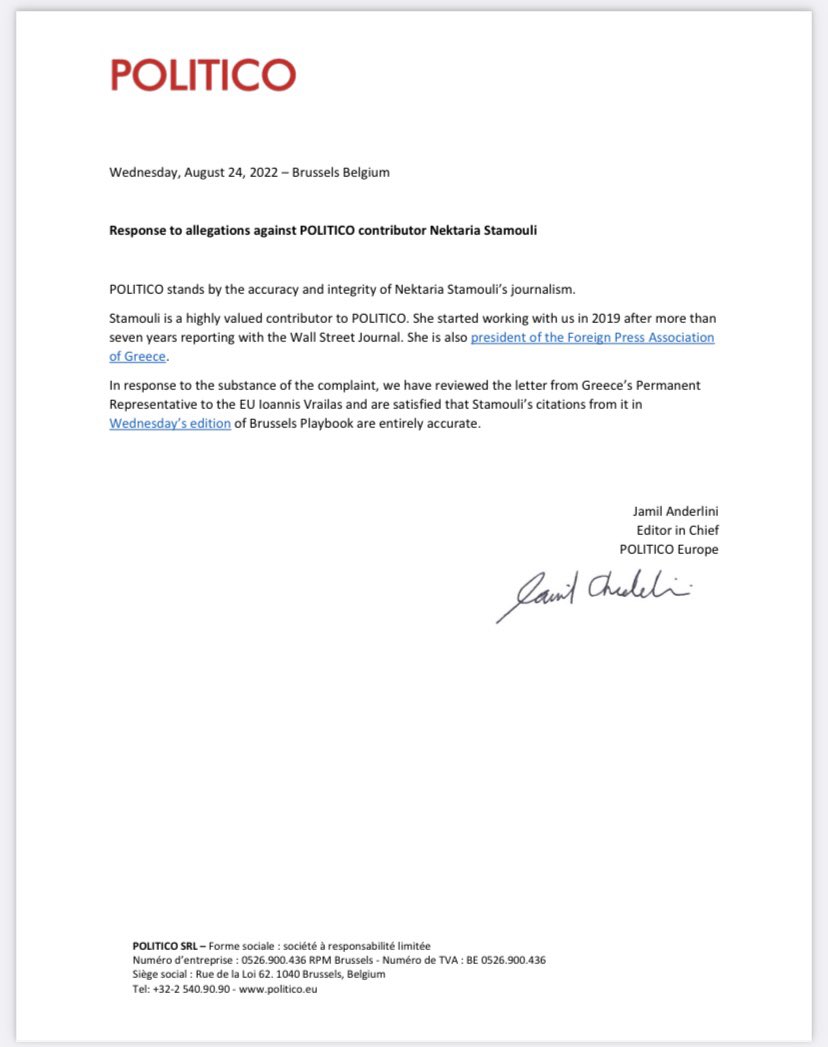 BTW Politico did not “reconstruct” anything on its report.

Wiretapping, Clapp and the NYT

It is the second incident with foreign press journalists reporting about issues the Greek government would love to present they never happened, at least with their knowledge, would rather have them buried and certainly keep them within the narrow borders of the small country, where they can dish out their own narrative and have it spread through certai media they supported with 20 million euros during the pandemic. 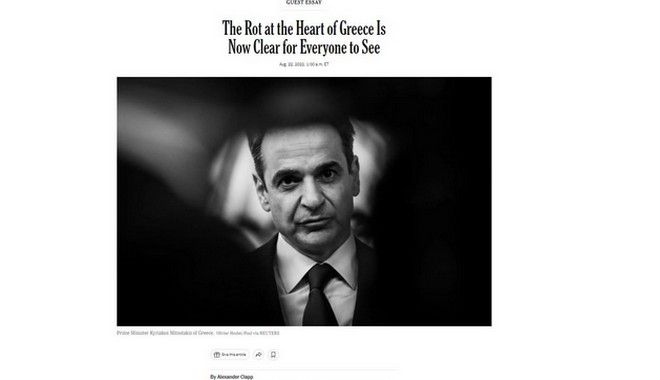 Not just the trolls.

Greek government spokesman on Alexander Clapp: "this is the same journalist … who in March 2020 denounced Greece internationally for defending its borders"https://t.co/D9vatyK2mq https://t.co/7iBie72hMB

To the attacks, the NYT responded with a follow up article on its FrontPage, the next day. 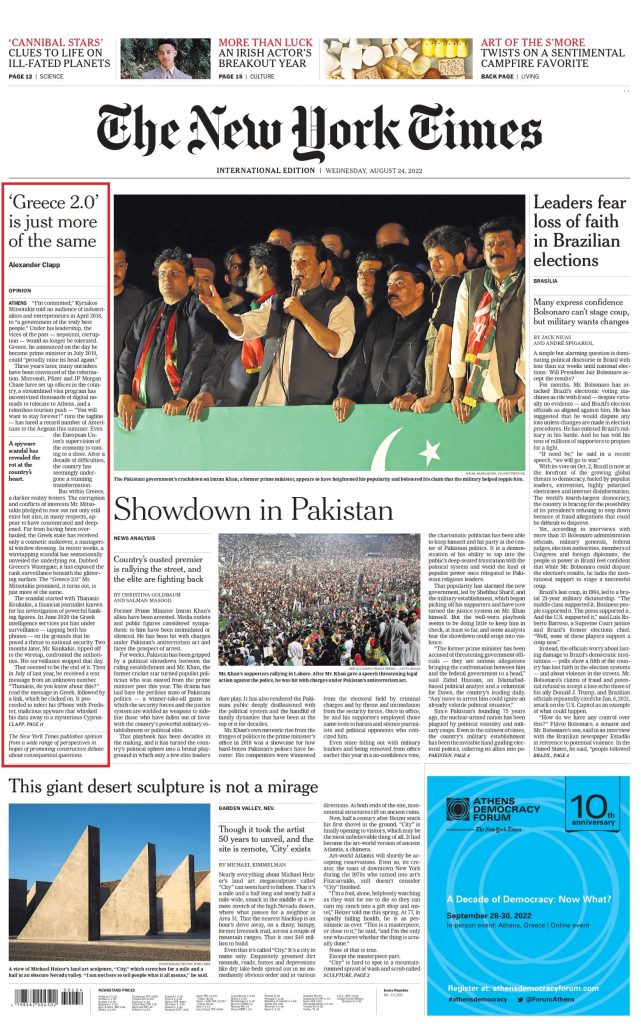 PS In case you wonder why Greece has dropped to 108th position on media freedom… attacks on foreign journalists is a common practice in autocratic regimes and third-world countries.