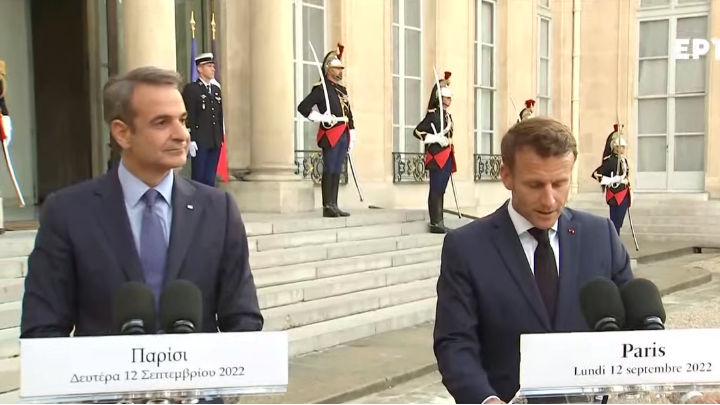 French President Emmanuel Macron and Greek Prime Minister Kyriakos Mitsotakis shared a joint message against Turkey’s provocations. In short statements to journalists ahead their working dinner in Elysse Palace in Paris on Monday evening, the two leaders stressed the importance of the strategic partnership agreement between Greece and France.

“This strategic partnership will not allow any unrest in the Eastern Mediterranean,” Macron stressed, while Mitsotakis underlined “we are stronger together.”

“We fully support Greece’s sovereignty,” Macron added, noting that full cooperation on foreign and defense policy and armaments is now more important in the face of challenges.

Macron expressed his satisfaction with his country’s cooperation with Greece in the fields of defense and security, also calling statements and provocations against Greece’s territorial integrity “ unacceptable.”

The French president emphasized France’s full support for Greece, and that “the cooperation between the two countries comes from afar – and goes a long way ahead.”

Referring to the issue of increasing Turkish provocations, Mitsotakis said that “ I will share with President Macron some thoughts on the increasing Turkish provocations in the Aegean and the Eastern Mediterranean. I thank Macron for his clear support for my country. We respond to challenges with readiness, and to those who threaten us -and who say that they will descend upon our islands suddenly one night- we say that we are waiting for them in the light of day, where it will be visible who has International Law on their side.”

Mitsotakis also mentioned last year’s signing of the multi-level strategic partnership agreement between the two countries, stressing that it contributes to the boosting of EU’s strategic autonomy.

He added that Greece and France are coordinating to find a European solution to the issue of increasing energy prices internationally, and he recalled the proposals submitted by Athens for putting a price cap on the price of natural gas, and decoupling the price of electricity from that of natural gas.

Macron expressed his country’s gratitude to Greece for its practical help in dealing with the unprecedented wildfires that hit France this year.

He noted his significant convergence of views with Mitsotakis on issues such as energy and the economic crisis, which he said will be the subject of the discussion at the working dinner with the Greek prime minister.