Man, oh man! What a twisted day today! I feel, I am living in a virtual reality suffering from an extreme borderline syndrome. Yesterday, Finance Minister Evangelos Venizelos announced a series of predatory and unfair austerity measures that grab deep holes in citizens’ incomes and minimize the available money to living.  Fin Min lowered the tax-free yearly income from 12,000 down to 8,000 euro. He not only imposed  a 10% tax to annual gross incomes of 8,000-12,000 euros but also a “Slolidarity Tax” of €200-1,000 to low incomes.

Again it is the low and middle classes that will come up for the huge Greek debt. They are those who normally pay their taxes before they receive their salaries in their wallets.

8,000 euro gross income per year means you have less than 666 euro per month available to pay rent, buy groceries, pay utilities. Not to mention other needs like clothing and health. No to mention the needs when you have children, right? Excempted from tax in the income scale 8,000-12,000 are pensioners over 65 and youth under 30 years old, jobless and disabled.

The new measures also punish entrepreneurs and self-employed with a ‘trade fee’ of 300 euro in the average. “Fee’ is the wrong word anyway, then ‘fees’ have normally a returning funtion. Here

nothing will be returned. So , they should better call it “punishment’. This amount comes in times of a high unemployment at 16% with negative outlook, in times when people desperately try to start-up a business to find a source of income.

No, I don’t need to mention in an extra sentence that the new measures will drive up recession and unemployment and stranguale the consumption.

Yesterday, the Finance Minister spoke of “unjust measures” and said, he will consider a new and fairer taxation system in the upcoming fall. We have a saying in Greece ‘You sell sea-weads as silk ribbons’. And that’s what is done here. “Fairer taxation system”? Athens keep repeating two crucial mistakes: inability to combat big scale tax evasion and to impose strict discipline on public spending. Then we heard nothing about drastic measures to minimize the state expenditures.

This morning I watched government spokesman Ilias Mosialos on state TV. You know what he said? “Greece must change the tax collecting mechanisms”. ‘Greece’????? Which ‘Greece’??? When a government official takes such a distance from the duties of the government he represents, I think I should migrate as far away as I can and thus as soon as possible.

The thought behind the government’s decision to lower the minimum taxable annual gross income was most likely the decades-long practice of  self-employed, like plumbers or electricians, who didn’t issue receipts and so they evaded taxes. They were jsut declaring 12,000 euro annual income and didn’t pay taxes.

We always knew that it was the Greek plumber the one responsible for the Greek crisis.  Now it’s the turn of the Greek electrician to ruin the eurozone.

PS Oh, our EU-partners gave the Green Light for the 5th loan tranche last night in Brussels during the EU summit. My male cat has been seeking for his balls all through the morning 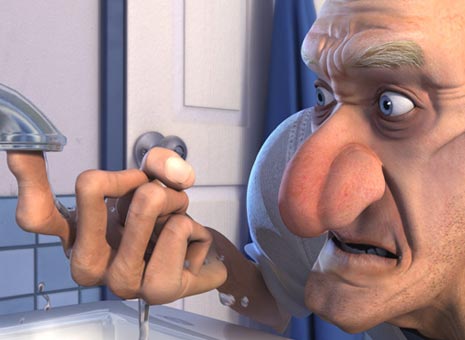