That’s a news items from the category ‘lighter note to economic misery’. Hollywood start Leonardo di Caprio enjoys holidays in the beautiful island of Zakynthos. According to unconfirmed information of Greek media, Leonardo di Caprio takes pleasure in the aquamarine waters of Zante together with his new girl friend Blake Lively. The two beautiful people swim in Greek sea,  drink Greek wine and eat Greek choriatiki in the Greek beach of Laganas.  There is no information whether the choriatiki contains onions or not. 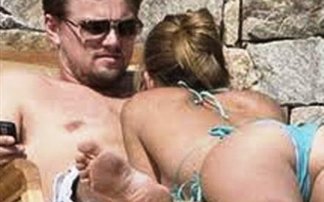 In previous years, Di Caprio had spent his summer holidays on the island of Spetses in the south Saronic Gulf. What more obvious than new girl-friend, new island?

Greek private STAR TV tried to investigate and confirm the rumors, however it found only male residents of Zakynthos claiming their are more male and more sexy than di Caprio and Lively should chose one of them.

Don’t ask me! I have no idea whether these pictures on the video show the Holywood couple on a Greek island… If someone of KTG’s Zante followers swom or had dinner next to Leonardo, please, confirm the news.

As the heat strikes again, I wish I’d be at a beach, at any beach with or without Leonardo…