They were all there: the President of the Republic, the Prime Minister, the whole cabinet, the military and religious leadership of Greece. They were all there, except the Greek citizens.  The parades of Independence Day turned into a private party between the politicians and 7,000 policemen assigned with their security. To protect them from the citizens’ anger….

The parade in Athens was short and painless, concluded in less than an hour and everybody went home with a bad taste in the lips.

For short time there was tension in the lower part of Syngtagma Square as a group of people tried to near the parade area. No, they weren’t troublemakers. They are seniors. Riot police pushed them with their shields away. 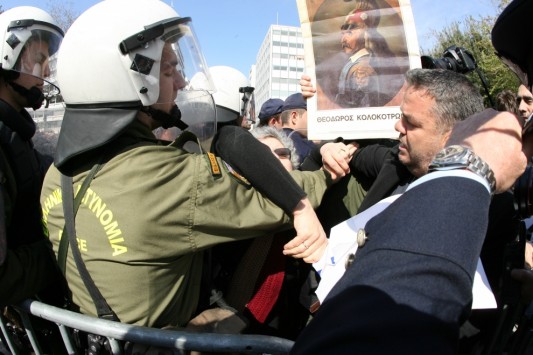 President Karolos Papoulias stood visibly uncomfortable when a journalist asked him how does he feel that the Disabled of the WWII were absent from the parade. For the first time. Papoulias was unable to give even a very brief answer.

Video: No answer is the best answer?

While Papoulias was   a wrath at the Monument of Unknown Soldier, a group of people was chanting “Thieves” and “Traitors”.

Police detained 25 people before and after the parade.

Protesters with banners against the emergency property tax and the banks

Chanted slogans and banners… if the politicians did not hear or see them during the parade, they can watch the “news” on television.

The centre of the Greek capital was turned into a high security area for two consequent days to avoid mass protests against the political leadership of the country. “It is sad to organize the parade with the help of the police” said Development Minister Anna Diamantopoulou.