Another “historical” day broke up in Greece, another “crucial crossroad”, another “last” attempt to form a government, nine days after the May-6 elections. Karolos Papoulias will meet political leaders at the presidential mansion at 2 pm. During talks on Monday, Papoulias sent Samaras (ND), Venizelos (PASOK) and Kouvelis (Democratic Left) home with his latest proposal: a government consisting of technocrats and other ‘personalities’. A government with a possible 18-month duty, assigned to deal with the dire economic situation of the country. And elections at the end of this period.

In addition to the three leaders, Tsipras (SYRIZA) and Kammenos (Independent Greeks) will attend the meeting. Papariga (Communist KKE) announced it will not. Michaloliakos (Chrysi Avgi) has not been invited.

Should Papoulias’ proposal fail, Greeks will have to cast a vote again in three weeks.

Venizelos supports a technocrats’ government provided the idea has the support of at least four political parties.

Kouvelis rejects the idea as a “politics defeat”.

Samaras does not look very positive either but said “to consider parameters”.

Tsipras most likely will not as a technocrats’ government will implement the bailout programme.

As for Kammenos… He is in a difficult position after the office of the President sent an alleged Kammenos’ non-paper to the other political leaders. The non-paper lists seven conditions of Kammenos to support a technocrats’ government, the most important of them to be “the state of economic emergency”. Kammenos denied to have issued such a non-paper, the presidency insists he handed it out to Papoulias on Sunday with the request to deliver it to the other political leaders. The row ended with Kammenos to have cancelled his face-to-face meeting with the president that was scheduled for 1 pm, one hour before the joint meeting.

According to a Presidential Degree on the May-6 elections, Greek Parliament is expected to open its gates to the new elected lawmakers next Thursday, May 17th 2012.

The parliament will open under the chairmanship of the senior re-elected MP (Vyron Polydoras/ND) from the previous board of parliament speakers. Former Speaker Philipppos Petsalnikos was not re-elected.

MPs will take an oath on Thursday. On Friday they will be asked to elect the new board of parliament speakers.

Should Papoulias fail to form a government today, a new Presidential Degree will dissolve the parliament on Friday, call for new “repeat elections” and set the date for elections as well the date for the opening of the new parliament.

I wonder, if the May-6 MPs will receive one month or two days salaries…

Panos Kammenos (INDEP. GREEKS) is walking to towards the Mansion surrounded by five aides.

Meeting between the President and the political leaders started

The Greek bond worth 435 million euro that matures today “will be paid”, an official told Reutersthis morning under conditions of anonymity. The bond is in hands of bondholders who refured to take part in the Greek bond swap (PSI) and it is under foreign law.

Caretaker Finance Minister Philippos Sachinidis cannot sign for the payment or reject it as it is a political decision.

Political leaders had urged caretaker PM Lucas Papademos to send them his proposal on the case.

It is not known whether the issue will be discussed at the meeting between political leaders and the president.

Meeting continues… No any leakage to journalists waiting outside.

Latest after May-6 elections poll – conducted by RASS om 10-11 May 2012, while exploratory talks to form a coalition government were on the way published by daily Eleftheros Typos on May 14/12.

Earlier on Tuesday: Presindent Papoulias and political leaders at the oval table short before the start of the crucial talks on government of technocrats or fresh elections

The  whole world heard somehow, somewhere that general elections took place in Greece on May 6. The whole world except Austrian Finance Minister Maria Fekter. She declared, she was susprised that Greece won’t have the same government as before the elections:

“Finance Minister Maria Fekter criticized the proposal by the Greek President Karolos Papoulias to resolve the Greek crisis with a government of experts [technocrats’ government].

“As for myself, I am rather surprised that the current government will not remains in office, but new people will come. A new government of experts. That means we’ll have to start from Adam and Eve again and explain, how to keep on with the loan agreement [bailout]”, Fekter said before the start of EU finance ministers meeting in Brussels on Tuesday. (Die Presse, in German)”

Yeap! That’s the ‘bad’ thing about democratic processes: they can result in ….surprises!

According to Greek Statistics Authority ELSTAT, recession at the first quarter of 2012 reached -6.2%.

A Greek caretaker government source told economic news website Capital.gr that the Greek bond maturing today will be paid. The Finance Ministry is expected to issue a relevant press release. 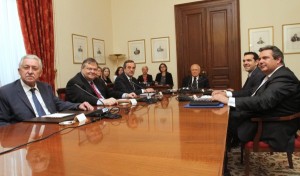 An internet joke claims they play “Monopoly”. The loser will be the real winner, because the game winner will have come up for all emergency property taxes…

Kammenos (Indep Greeks): “We insisted on a broader coalition government with a national purpose. Our proposal was denied. They wanted a government consisted by our creditors.”

Kouvelis (DemLeft): “The talks have concluded.”

Venizelos, Samaras, Tsipras will make statements from their parties headqaurters.

It looks that no agreement was reached on a technocrats government. Now the question is what kind of caretaker government will take the country to fresh elections.

Athens Stock Exchange sharply dropped at -3.57% after political leaders failed to agree on a technocrats’ government.

Not clear if the Parliament will open on Thursday.

Kouvelis statements “The country is heading towards new elections.”

After the failure of government talks, political leaders make statements saying in fact what they proposed for the solution of the government problem and reveal their plans for the economic problems solution. It’s elections campaign time …. lol

One billion euro left private bank accounts and were transferred abroad after May 7th.

According to Greek Constitution, the president will choose one of the country’s highest judges as caretaker Prime Minister 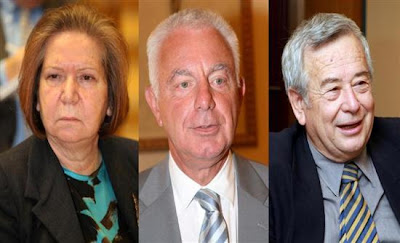 BTW: Pikramenos in ENG translation “embittered” – that would fit to our situation, wouldn’t it?

Most possible dates for the ‘repeat elections’ are considered June 10th or June 17th 2012.

Members of the Parliament who were elected at May-6 elections will take an oath on Thursday, May 17/2012 at 11 am.

They will meet again on Friday to elect the Parliament Speaker.

When the president call for new elections, he also dissolves the Parliament.

Live -Blogging concludes at this point.

Thank you for following political developments in Greece with KTG!

Keep tuned with “Keep Talking, Greece” for other news of the day.