OXI-Day Parades: Clashes and Protests, while Students Set Their Own Mark… (videos, pcts)

Members of main opposition party SYRIZA and left-wing ANTARSYA clashed with police in Thessaloniki, after the official military parade was over. Police reportedly fired tear gas in order to hinder the protesters to hold their own parade. Unconfirmed reports speak of two injured protesters.

In Athens, the main parade of secondary school students was much shorter than in previous years. There was some tension, as parented attempted to come closer to the event.

A student put her own mark on the parade by choosing to walk barefoot!

In Irakleio, Crete, local authorities had to leave the parade area, after people started to throw bottles of water and chant slogans.

In Patras, the parades took place under the presence of strong police forces. A parallel ‘parade’ was held by members of KKE and SYRIZA.

In Agrinio, a group of protesters staged an anti-fascist parade.

In Preveza, the students turn the heads on the opposite direction than towards the local dignitaries. 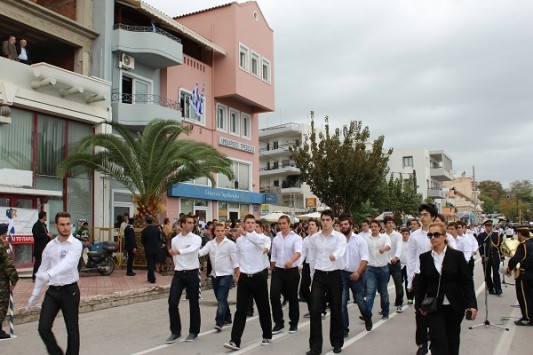 In Peristeri suburb of Athens, a student wore an anti-nazi armband. 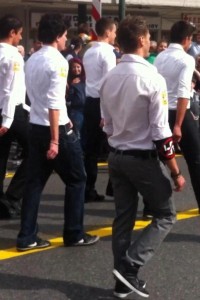 In Chalkidiki, students of Ierissos town paraded wearing t-shirts “S.O.S. Chalkidiki” and chanted slogans against the gold mining in the area. 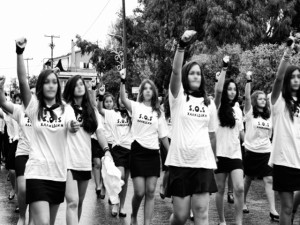 In many cities and suburbs of Athens, members of political parties form the left spectrum staged their own parades after the official ones holding anti-austerity and anti-fascist slogan.

Across the country the security measures were draconian in order to avoid protesters to come close to politicians.

In some cities the parades were cancelled due to heavy rain.

In general we can say that the parades took place just for the local VIPs, while the students’ parents and spectators had to watch the proud Greek youth from far away.

For whom was the parade, you said? Certainly not for the people… 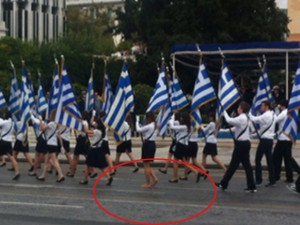 A barefoot student: Despite the patriotic speeches by Greek politicians, this student will be without job (and shoes) once she finishes her studies… UPDATE: After media, websites and blogs interpreted the barefoot student as a ‘symbolic protest’, Education Ministry issued a statement clarifying that the student was barefoot, because of a broken heel at the start of the parade…