Greeks cheer as PM Samaras announces: Free Wi-Fi for all

Greek Prime Minister has a dream. A vision on how to help young unemployed Greeks to deal with the debt crisis. With his powerful intuition to feel the pulse and read the most secret wish of jobless Greeks Antonis Samaras made a promise in public: to give the folk what belong to folk. That is, to provide all with free wi-fi access. Whether in big cities or remote villages.

Prime Minister Antonis Samaras made indeed this announcement during a rare television interview on Monday evening.

Samaras proposal came when he was asked “what hope can the government give to young people.”

The answer was indeed breathtaking.

“In one year, we will have free wi-fi all across Greece,” Samaras said and added “I have studied the issue and I can promise it with certainty.”

To strengthen his argument, Samaras mentioned all these Greek tech companies, founded by young Greeks, which have been bought by foreign investors.

The promise came among other issues like austerity, debt-crisis and unemployment. And as expected it sent waves of thrilling emotions to the whole nation.

Jobless mothers of jobless young Greeks knelt on the streets and kissed the asphalt.

Low-pension grannies of jobless young Greeks made the sign of the cross and thanked God for the holy inspiration He beamed to the Greek Prime Minister.

One internet-unsavy granny reportedly asked “Who is this Wi-Fi and why he should be freed.”

On Greek internet ironic and sarcastic comments were summed up in a hashtag #free_wifi. 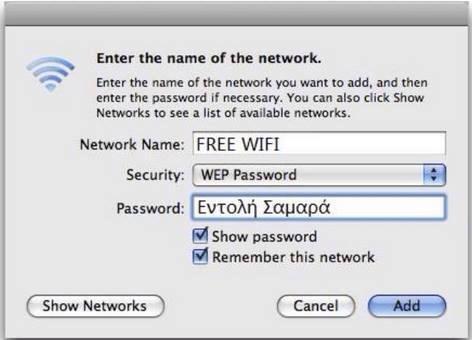 While, I hope the free wi-fi access will not be implemented according to age and income criteria, another mean Greek wrote:

“The promise to have the whole of the country hooked up to wireless Internet by next year seemed outlandish, though. Greece still has low Internet penetration and broadband speeds so there is definitely room for improvement but going from this to full wi-fi access in one year seems a stretch and certainly does not strike at the heart of young Greeks’ concerns. These factors apart, it also gives Samaras another – very public – pledge to live up to in the months to come.” (macropolis.gr)

On Tuesday morning, some twelve hours after the announcement of pioneering innovation the whole world knew: Greeks are an ungrateful nation.