May 27, 2014 Politics Comments Off on Greeks send resistance fighter Manolis Glezos, 91, to EP with more than 233K votes 273 Views

Manolis Glezos, the WWII hero and resistance fighter, the man who took down the Nazi Flag from the Acropolis, is heading to the European Parliament after more than estimated 160,000 SYRIZA voters “crossed” his name on the ballot list. On Tuesday morning and with 31.14% of the ballots counted, Glezos leads with 155,425 crosses, while second on SYRIZA list is former athlete and SYRIZA MP Sofia Sakorafa with 100,998 votes.

Manolis Glezos is heading an unofficial investigation committee for the repayment of the enforced loan of Nazis during WWII occupation. 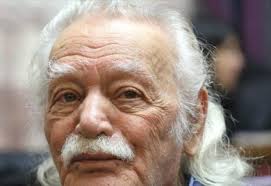 Born on 9th September 1922, veteran politician and writer Manolis Glezos is a worldwide famous political figure known for his participation in the World War II resistance. The left politician has been sentenced to death several times by the Nazis during the WWII occupation and by the Greeks during the civil war.

“On May 30, 1941, Manolis Glezos  and Apostolos Santas climbed on the Acropolis and tore down the swastika, which had been there since April 27, 1941, when the Nazi forces had entered Athens. It inspired not only the Greeks, but all subjected people, to resist against the occupation, and established them both as two international anti-Nazi heroes.

The Nazi regime responded by sentencing Glezos and Santas to death in absentia.

Glezos was arrested by the German occupation forces on March 24, 1942, and was subjected to imprisonment and torture. As a result of this treatment, he was affected by tuberculosis.

He was arrested on April 21, 1943 by the Italian occupation forces and spent three months in jail. On February 7, 1944 he was arrested again, this time by Greek Nazi collaborators. He spent another seven and a half months in jail, until he finally escaped on September 21 of the same year.

The end of World War II was not the end of Glezos’ plight. On March 3, 1948, in the midst of the Greek Civil War, he was put to trial for his political convictions and sentenced to death multiple times by the right-wing government. However, his death sentences were not executed, because of the international public outcry. His death penalties were reduced to a life sentence in 1950.

On December 5, 1958 he was arrested and convicted for espionage, which was common pretext for the persecution of the supporters of the left during the Cold War. His release on December 15, 1962 was a result of the public outcry in Greece and abroad, including winning the Lenin Peace Prize.

At the coup d’état of April 21, 1967, Glezos was arrested at 2 am, together with the rest of the political leaders. During the Regime of the Colonels, the military dictatorship led by George Papadopoulos, he suffered yet another four years of imprisonment and exile until his release in 1971.

Manolis Glezos’ political persecution, from the Second World War to the Greek Civil War and the Regime of the Colonels totals to 11 years and 4 months of imprisonment, and 4 years and 6 months of exile.” (more on Manolis Glezos here )

Under the flag of United Democratic Left party (EDA), Glezos was twice he was elected member of the Greek Parliament while in prison.

Manolis Glezos said in a statement that he will hold the EP seat for one year and then resign for a younger MEP. As his doctor forbade travels with airplanes, Glezos said he had a plan B: to travel to Brussels by ship and train. 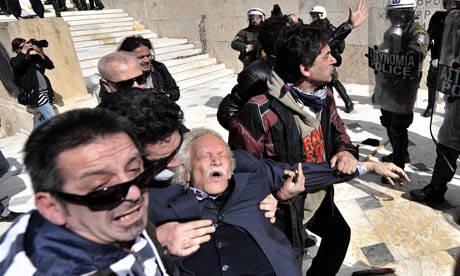