Fear-mongering at its peak: Grexit on Thursday, Grentry on Monday?

Only if you live in Greece and read every crap posted on mainstream websites or listen to mainstream media to realized the fear-mongering propaganda Greek voters are exposed to, just days before the parliamentary elections next Sunday.

One of the striking examples we witnessed Monday morning. The news was referring to the decision of the European Central Bank that is about to announce large-scale purchases of government bonds (“Quantitative Easing” or QE) on upcoming Thursday, January 22nd 2015.

One of the fear-mongering scenarios claimed that the ECB will exclude the Greek government bonds because of the risk of a SYRIZA-led government that might arise from the Sunday elections.

“According to executives who have knowledge of the discussions behind the scenes, the final decisions will be taken Thursday and all options are still under discussion. However, the same executives note that it is very difficult at this juncture to announce a government bond purchase program “that includes now the Greek bonds, since a party can come to power, which is considered by many that it desires to restructure Greek bonds already bought by the ECB.
In fact, they say, that it would be unreasonable for any organization to lend to someone who openly speaks about the possibility of trimmed loans….

Once the information that wants the ECB to postpone for later the decision for Greece is verified, thsi will mean that there will be a situation where the country will be de facto outside the Eurozone, the officials from the economic team said. (full article in daily Kathimerini Greek edition)

One of the most popular Greek websites picked up the Kathimerini article and uploaded it with the unbelievable title:

“Most likely Greek exit from the eurozone next Thursday before the elections”. 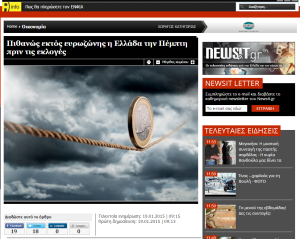 This triggered an outrage among Greek internet users who threatened with judicial measures and “charges on spreading of false news.”

Responding to the outrage the website edited the title with “Crucial decisions for Greece and the Eurozone on Thursday”.

However, someone did not noticed the dangerous game and retweeted:

“whether Friday before the elections, Greece will have the Drachma and Antonis Samaras as [acting] PM”.

“Greece will exit the eurozone on Thursday< but enter again on Monday, if Samaras wins the elections.”

And some commented that they wouldn’t worry about such an option,

“because if SYRIZA wins we will enter again the eurozone, as Tsipras supports the euro.”

Apart form the jokes and the ironic comments, I must confessed that I was shocked this morning to read this title. I had to open the article and read it through and in addition to go and  carefully read the original source.

But how many internet users read more than just the title? Or are not able to understand the economic and political blackmails and the hidden messages  based on “sources”?

But this is where they put their bets: to scare people and take advantage of their lack of knowledge.