“Greek negotiations at the euro zone are at a crucial stage,” Prime Minister Alexis Tsipras said on Wednesday, as the country prepares a request to seek a 6-month extension of the loan agreement. Even before the requested was worked out, submitted or read, German Finance Minister Wolfgang Schaeuble rejected it.

In an interview by German ZDF TV, Schaeuble rejected the distinction between loan agreement and bailout program and said in his usual tight-lipped way:

“There is no loan agreement. This is an aid program for Greece.

Greece can only extend its loan agreement if it sticks to reforms and austerity measures.

Greece wants more credit, but there have to be conditions… it’s about the principle of helping them help themselves.”

Schaeuble referred to the Eurogroup decisions saying that they have to be respected.

Germany’s idea of a solution with Greece is extension of the current bailout program with all conditionality first and then flexibility.

However, the Greek side considers with suspicion the flexibility praised by Schaeuble and Eurogroup, as in Dijsselbloem’s draft of February 16th, there was only a vague reference of “some flexibility,” without specific references. 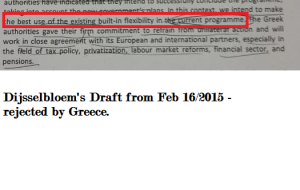 In the same course with Schaeuble is also EU Commissioner Jean-Claude Juncker  who apparently ‘mediates’ for an extension of the current program first and then a new agreement with Greece for another program.

Speaking to German Wirstschaftswoche, Jucker said that he has taken up initiative to mediate between Greece and the Eurogroup and achieve an extension of the existing program to bridge the time until summer.

“I work together with the President of the Euro Group Jeroen Dijsselbloem to achieve an extension of the existing program to bridge the time until summer. Until then, we should be able to agree with the new government in Athens on a new reform- and growth-program for Greece.”

Juncker stressed that “Greece has to fulfill all financial obligations to the European and international partners” and that “this has to be the basis of any new agreement.”

The Greek loan agreement extension proposal is based mainly on the Moscovici’s draft, while Schaeuble, Juncker & Co insist on Dijsselbloem’s draft, that the Greeks rejected on Febr 16th.

The request for loan agreement extension is expected to be submitted Wednesday evening or Thursday morning.

State NERIT TV reported from Brussels, that after the request submission, the Eurogroup working team will evaluate it and that a new Eurogroup meeting will take place on Friday, February 20th.

Greece insists that any decision of the Eurogroup is a political and not a technical one.

Austerity Commitments by the previous gov’t

One thing we should take into consideration trying to explain the inflexible stance of Greece’s EZ-partners, is a long list of commitments sent by the previous government to the Troika. In an 48-page e-mail sent by Finance Minister Gkikas Hardouvelis to the Troika on 29. November 2014, Nea Dimokratia-PASOK coalition government had committed to proceed to further austerity measures, although it was clear that snap elections would taker place and that they would most possibly go.

PS I have no idea how Greece and the Eurogroup are going to solve their issues without… flexibility from both sides. An agreement may be just one or two flexible words away 🙂