The Greek Atheists’ Union slams the expense of flying the “Holy Light” from Jerusalem to Athens at Easter. In a letter to all ministers in charge – finance, foreign, defense and religion – the Union questions the necessity to bring the Holy Light to Greece at a time of economic suffering, describing the tranport with a state jet and a public officials delegation as a “not  necessary luxury”.

“In a time when taxpayers Greeks are experiencing cuts in wages and pensions, a severe taxation, unemployment and compression of real income, we consider unthinkable that the Greek State and therefore the Greek taxpayers give even one euro for the transfer of the supposed “Holy Light,” a Union press release stressed.

The Union stressed that a private sponsor had come up for the transfer of the Holy Light form 1988 to 2000, and that from 2002 onwards the state pays a lot of money.

“Is there still money for the transfer of lamps and the welcome ceremony as if it was a state leader?” the Union asks.

The Atheists request information about the cost of the transfer of the Holy Light as well as its distribution via airplanes to churches across the country, the accommodation and other expenses for the accompanying delegation, the expenses for the military  personnel, the events and whatever accompanies the arrival and distribution in Greece. 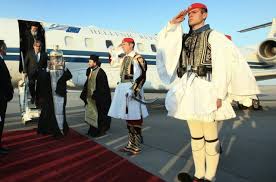 The Patriarchate of Jerusalem assured that the “Holy Light” will travel to Greece also this year. Patriarchate spokesman Giorgos Vasileiou said :

“To the Atheists’ Union claim that the Holy Light should not travel to Greece, I have to say that their approach seals the fact that only the people of the darkness are afraid of the Light and I assure them that despite their opposition, the Holy Light will come this year in our country.”

No, the spokesman did not even slightly hint that the Patriarchate of Jerusalem or the Church of Greece could eventually come up for the cost of the Holy Light airborne to Greece.

PS it will be the first time that a government of leftist atheists will pay for the miracle of Holy Light to Greece. But ooops! They have a faithful coalition partner named Independent Greeks