The air stinks. Tonnes of paper and plastic have been burning for the last four days. A dark cloud full of toxic fumes takes the breath of millions of residents in the western of Athens. The toxic cloud has prompted the Education Ministry to have schools in the area closed and the Health Ministry to issue a warning to the residents , especially the elderly to avoid physical exercise outdoors. the warnings come with delay. 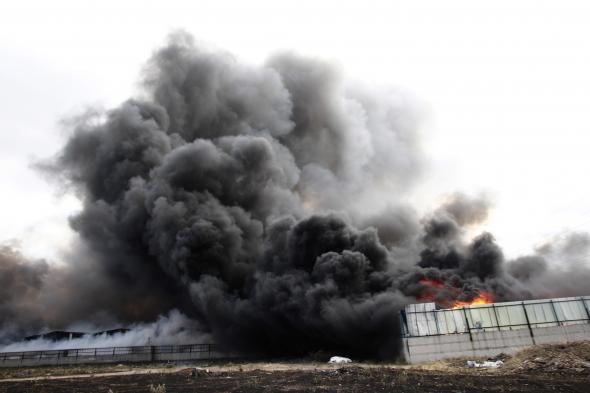 The fire broke out on Saturday in the recycling plant in Aspropyrgos suburb, 15 km northwest from the center of the Greek capital. Today’s light North-wind is carrying the toxic cloud further to the south. 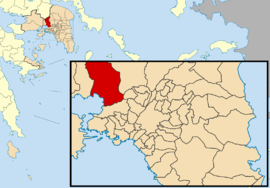 The fire brigades have not managed to extinguished the fire that has reportedly started in “some dry wild grasses” outside the plant. Last Saturday the winds were blowing with 7 Beaufort intensity. The fire went quickly out of control, spread wild. “26,000 cubic meter of recycling material is on fire,” Greek media report on Wednesday.

No resources to extinguish the fire?

According to a high-ranking office of the Fire Department, in order to extinguish such a fire only a lot of water is needed in order to reach deep into the burning paper and plastic mass. Such a process takes time. But in order to limit the toxic smog, we have to cover the fire with soil so that no fumes arise from the burning material. Only soil can isolate the toxic substances from the oxygen.

The Athens Prefecture responsible to provide the funds allegedly “does not have the resources.”

A 34-year-old man in charge for the plant operation was arrested over the weekend on charges for violating the environment safety and absence of fire security measures. Police seeks to arrest also the owner, president and CEO of the company, a 46-year-old businessman, on the same charges.

Citing police sources, Greek media report that there when police and environmental experts went to the site, there were “many fire sources across the area that spreads over 26 acres and that that there were cans with mineral oil, car tires and packages with medicines for which the company was not licensed.” Further, police and experts investigations teams found out that “the company had not the necessary fire-fighting measures and it did not activate the emergency plan, resulting into severe environmental pollution and dangers for the public health.”

The plant “General Recycling SA” (Γενική Ανακύκλωση ΑΕ) was inaugurated in 2008 and was operating with all modern infrastructure and security. It was – and probably is- the biggest recycling plant in Attica prefecture and one of the biggest in South-East Europe with a capacity to recycle 40,000 tonnes of material per month. It absorbed all recyclable paper, plastic and wood material from municipalities and big companies and by the method of reselection-processing-recovery process it was producing new material for sale. There were times that the company employed 500 workers.

Last December, the 150 workers went on strike claiming their salaries not been paid for eight months. the strikers had told the media that they were receiving threats the plant would close down if they couldn’t return to work.” The company has been employing mainly economic migrants from Pakistan, Bangladesh and India.

Nearby residents claim that there were fires also in the past and that the controlling authorities had fined the company. There are also claims that the company had debts to the banks, debts to municipalities, to business customers, but also to the state.

According to Kathimerini daily the plant was under-operating in the recent months and that the company had debts also to social security funds. 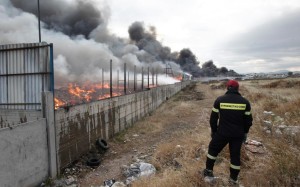 Minister for Infrastructure & Enviroment Panayiotis Lafazanis said that “in-depth investigation in every direction to investigate the causes for the fire continues.” Adding that there will soon be conclusions, Lafazanis said “fires like this are caused either due to negligence or criminal activity.”

The results from the fumes and toxic substances measurements are expected soon.

PS pah! where is the plant owner?