The family of a friend is divided: her husband and her two children, 20 and 21,  will vote “NO” in Sunday’s referendum, while she – a left-wing voter all through her voting life – was still undecided on early Saturday afternoon. “Hm… I don’t know yet, I despise the old corrupt politicians but I’m scared about our economic future,” Eleni tells me.

She was scared when she heard on Friday night about the Financial Times report claiming that a 30% ‘haircut’ on deposits of over €8,000 was possible.

On Sunday morning, Eleni, 55, went to the polling station and crossed the NO. “Ah, WTF! I cannot be on the same line with all the corrupt politicians of the past, with the country’s lenders.”

Polling stations for Greece’s crucial referendum opened at 7 o’ clock in the morning and will be open until 7 in the afternoon. The first secure estimation of the result is expected by 9 p.m.

The first secure estimation will be based on the counting of 10% of the ballot boxes. It will be released, if NO-YES difference is above 4%-5%. Otherwise, it will be released later.  via state ERT TV

There will be no exit polls, as pollsters said that they have not experience for referendum exit polls.

Also Vicky told me this morning that she voted in favor of NO, also despite the fact that she was scared to death by the FT report. “I overcome the shock. I had a talk with myself and decided to take the risk. If you think of who has been campaigning for the YES, then it makes it easy to decide…”

With exception of Communist KKE that decided to cast its own ballots and vote “invalid” and extreme-right Golden Dawn that will vote NO, all opposition parties campaigned for YES. They lined up together with Greece’s mainstream media and the country’s the creditors: European Union, International Monetary Fund, European Central Bank, even the European Parliament President and President of Council of Europe. Juncker, Dijsselbloem, Lagarde, Tusk, Schulz, Schaeuble, Merkel… the list of national and international YES-supporters is incredible and dangerously long.

Dangerously in the sense that the YES-propaganda got literally out of control in an unprecedented scare-mongering paranoia. I have never seen such a fear-mongering delirium in the last 5 years, since Greece sought the creditors’ bailout. One-sided and often misleading information, local and foreign politician’s statements of Referendum-Doomsday, scenarios of sheer economic horror and total collapse.

Although I have been covering, monitoring and reporting about Greece-creditors talks of the last 5 years and did the same during the elections of May and June 2012 and January 25th, the European Parliament elections 2014, this time I saw that Greeks were exposed to a 24/7 YES bombardment as never before.

And many people got angry. Very angry. “I stopped watching news and political programs since last Friday. What they do is criminal… to scare people like that,” Antonis, 67, a YES-voter, told me. He said that he voted YES because he has been always voting for the conservatives, that is New Democracy, and he doesn’t like neither does he trust Tsipras and the communists.

People got very angry at the mainstream media, primarily at the television channels that among others have been overly reporting about the queues outside the banks and the ATMs, about the “pensioners with trembling legs trying to get €120 from their pension”, “with the last power left in them pensioners try to get money” – original TV-stations quotes.

An eyewitness told me that some angry pensioners attempted to put the van of a private TV-station on fire, on Friday. The incident took place in a suburb of south Athens, outside a bank. Another friend who has been frequently using this bank told me that there are always queues outside this bank because it is the only branch in the area, after 4 others were closed in the last years. “The TV van was there every day, the whole day,” he added.

“Unfortunately, some colleagues mainly in television media, instead of following the imposed strict ethical rules, diverted to delinquent behavior, substituting the journalistic function with undisguised propaganda.

This provocative behavior of journalists who act as εγκάθετοι and cause the general indignation is being denounced. Particular is the responsibility of managers and other executive personnel in all media.”

ESIEA also condemned attacks against journalists and urged the media to avoid behaviour that escalates a “dividing atmosphere” in the country.

εγκάθετος: somebody who takes position on purpose, following specific orders. [sorry, I don’t know the word in English]

The scaremongering propaganda in favor of YES seems to backfire. While public opinion polls were very clearly in favor of NO at the beginning and the difference YES-NO went on knife-edge by Friday, now more and more people and analysts estimate that NO will have a very clear difference than expected.

“I cannot vote in favor of what corrupt politicians and media propagate, all those who brought our country to this situation” said Anna, 45, a former PASOK voter. “Look, YES-supporters even put pressure on Karamanlis* to come out in favor of YES, although he hasn’t said a single word in the last 5 years, about the crisis. Or Papandreou, who ruined us.”

“The media talk is crap. Of course, I understand that it is about in this Referendum even if the question is confusing,” said Despoina, 64. “It is about to decided on something new or follow the same old path of politicians who have no respect of the people. It is about our pride as a nation, as a country.”

Τhe Referendum campaign officially concluded on Friday with two big rallies by YES and NO supporters. 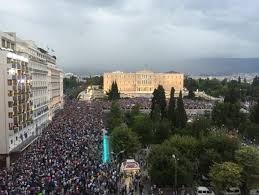 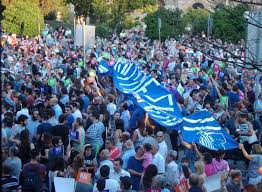 The  ‘fight’ continued on Saturday and Sunday on television stations, newspapers and social media. 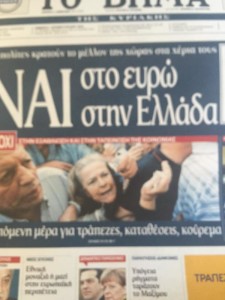 Front Page of mainstream TO VIMA on Saturday. “YES to Euro in Greece”

On Sunday, YES-supporter Nikos told me, he estimates the result to be 60%-65% for NO. Some other people estimate that NO will win with some 60%.

“NO must win so that Tsipras can start negotiations from a complete new basis,” says Yiannis, 21, “With the old regime, with the corrupt politicians there is no future for us.” According to polls, the majority of Greece’s youth supports NO and thus up to 70%. The majority of Greece’s youth is without job and youth unemployment has been constantly at least 50% in the last 4-5 years.

In order of the Referendum to be valid 40% of registered voters must cast their vote.

Concluding this report, I reckon my blog-post on the day of January 25th elections, when a lot of Greeks had said that it was anger that triggered their decision.

It looks as if the boomerang is on its way back this Sunday.

*Costas Karamanlis – New Democracy was Prime Minister 2004-2009. According to official data, the Greek Debt skyrocketed during this time.