With a wide majority of 251 votes the Parliament authorized the Greek government to reach an agreement with creditors on another “rescue” package with will bring more painful austerity in the next 3 years.  The roll call voting ended at 3:30 am Saturday with heavy losses for governing left-wing SYRIZA as two of its ministers and the Parliament Speaker did not back the bill, another 7 chose to be absent, among them also ex Finance Minister Yanis Varoufakis, while 15 SYRIZA MPs who voted YES issued a statement underlining that it was a “YES, but…”.

Votes distribution among the 291 present MPs out of 300

Absent were: 7 SYRIZA MPs among them Yanis Varoufakis and 2 GD MPs

Although the Prime Minister has the backing of his junior coalition partner and of three parties form the opposition, the vote result weakens Tsipras’ party power as some 30 SYRIZA lawmakers openly differentiate themselves from his policies. This could cause him troubles especially when it comes to ratify the agreement with creditors and to vote the austerity measures bills. Already several scenarios about the next political steps started to circulate, among them is also the one of early elections and new coalition government. I will report about them on a separate post. 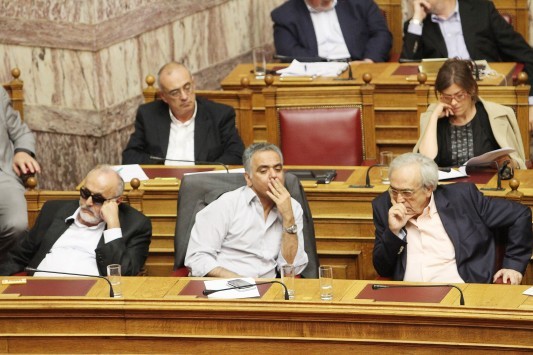 Exhausted: The Prime Minister, the government lawmakers & ministers. The debate started at 11:53 pm when the Parliament Speaker insisted to go by the book: when a Bill comes to Parliament in the form of “ugency”, the Parliament Committee decides on one day, the voting takes place on the following day. She was right to decide to go by the book, as ex PASOK leader Vanizelos has a sharp Argus eye on the government’s doings. Even after the Referendum, Venizelos was still insisting … – sorry I could not follow his constitutional argument. 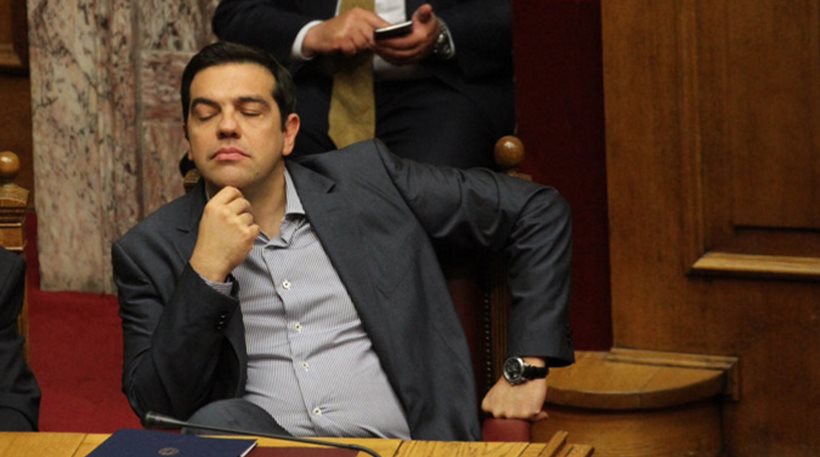 In a statement issued at 5 o’ clock in the morning, Prime Minister Alexis Tispras implied that the internal party “cleaning” would be due after Greece has reached an agreement with creditors.

“The Parliament gave a strong mandate to the government to reach an economically sustainable and socially just agreement with the creditors. The important issue is now the successful conclusion of the talks. All other issues will follow.”

It is hardly expected that PM Tsipras would initiate any political steps before this crucial weekend, where creditors are called to approve or reject the Greek proposals of Thursday. The Euro Working Group meeting is taking place at 11 am on Saturday, the Eurogroup finance ministers will meet at 4 pm. On Sunday, a Euro Leaders and a EU Leaders Summit are scheduled to bless or reject Greece as their member.

The main objection of SYRIZA lawmakers to not back the authorization bill is that a new agreement with creditors will mean a 3.bailout package with more austerity.

Three SYRIZA MPs chose to be absent, issued a statement instead saying that the bill is not just about authorizing the government to negotiate with creditors but a commitment for a 3. bailout that is written by creditors’ demand and that will sink the country to further economic impasse.

15 SYRIZA lawmakers among them also two Alternate Ministers (Isychos/Defense, Chountis/Foreign Affairs) issued a declaration saying that they voted “YES” only in order to avoid to cause troubles for the government for possibly losing the absolute majority -“δεδηλωμένη”- in the Parliament

Parliament Speaker and SYRIZA MP Zoi Konstantopoulou voted “Present”.  Lawmakers from opposition New Democracy shouted at her “Resign now!” There are claims in the Greek media that also some government members expressed discontent and wanted Konstantopoulou to resign.

Earlier on Friday, Yanis Varoufakis had declared that he supports the government and left for the beautiful island of Aegina to spend the weekend with his daughter.

The voting took place 5 days after almost 62% of the Greeks voted NO to austerity with many of them also rejecting rupture with the creditors that would lead to immediate bankruptcy and would contain the risk of exit from the eurozone.

In his introductory speech, Finance Minister Euclid Tsakalotos said that “Greece is now in a better position than before the July 5 referendum where voters followed government advice and rejected terms of a previous bailout proposal.”

“Greek people did not give a mandate for rupture,” PM Tsipras told lawmakers. “They gave a mandate to strengthen the government’s negotiating power for an economically sustainable deal.”

Whether voters voted NO to rupture but silently yes to another bailout package, if Tsakalotos and Tispras come back from Brussels without a strong commitment by the creditors for a debt relief, I “see” the government to lose a significant number of lawmakers quicker than they think.

SYRIZA has 149 seats in Parliament.

PS PM Tsipras may win the opposition and lose his own lawmakers.