Tsipras’ new cabinet sworn in: In the bailout agreement we trust…

Greece’s new government stands. 46 men and women sworn in on Wednesday morning to serve the country and the citizens in the name of God or just the Constitution. Not all the new ministers took a religious oath.

Prime Minister Alexis Tsipras and his coalition partner Panos Kammenos preferred to keep the majority of ministers from the old cabinet, even though most of them were appointed to new portfolios and sphere of activity and responsibility.

In the economic team, the new SYRIZA-ANEL government reappointed  Euclid Tsakalotos as Finance Minister and interim Finance Minister Giorgos Houliarakis as deputy Finance Minister. Both were leading the negotiations with the country’s lenders, especially after Varoufakis resignation beginning of July.

The appointment of one member of the cabinet has already triggered a storm of reactions, so far in the social media only. ANEL- MP Dimitris Kammenos (no relation with Panos Kammenos), deputy Transportation Minister is famous for his racist, homophobic and antisemitic stance (more on a separate post, later) and many wonder why Tsipras accepted his appointment.

Contrary to ministers and their much ambitious promises to “restore social injustice”, “raise minimum wage”, “pay 13th pension” and other nice things, today old and new ministers were very sober.

“Our aim is to implement the [bailout] agreement in a way that is fair,” deputy Prime Minister Yannis Dragasakis told journalists before the sworn-in ceremony.Dragasakis did not elaborate on what is fair and what is unfair.

Also Labor Minister Gorgos Katrougalos stressed that the new administration elected Sunday had to focus on the reforms that were a key condition for the third international bailout.

“There is potential, if we spend money frugally, things will reach for many.  You know, Gemista is a Greek invention so that a Greek family can eat very cheap.”

Apparently, desperate housewife Fotiou will solve the humanitarian crisis with self-swelling rice – or pasta – to feed school kids and families in need. 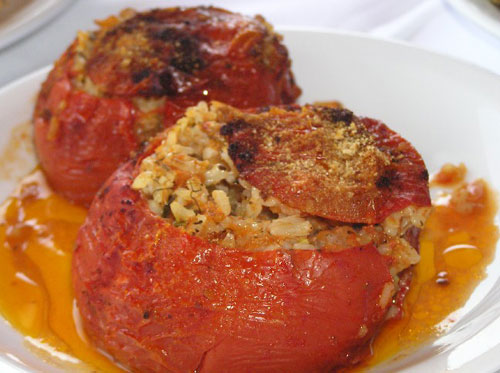 After the nice rice ceremony pictures and the sober statements, Tsipras-Kammenos ministers, deputy ministers and alternate ministers had to rush to their offices and work out plans on how to rip off Greeks of 4.8 billion euro till the end of the year.

Αlready the General Secretariat of Public Revenues is preparing to send the Unified Property Tax bills to millions of property owners with the aim to cash 2.65 billion euro in the period October 2015-February 2016.

FinMin Tsakalotos said “we need time so that people understand the changes” and probably took his pen to sign the new “taxation hikes” and the elimination of tax-breaks”, just to start with.