Idomeni: Two refugees set themselves on fire out of protest for Borders Closure

Two men poured gasoline on their clothes and set them on fire on Tuesday morning at the Idomei refugees camp. Other refugees who were standing by managed to extinguished the fire and save their lives. But both men suffered injuries and were transferred to hospitals in Kilkis and Thessaloniki, reports the Athens news Agency.

With their action, the two refugees reportedly wanted to protest the appalling conditions at Idomeni camp and the closure of the borders. 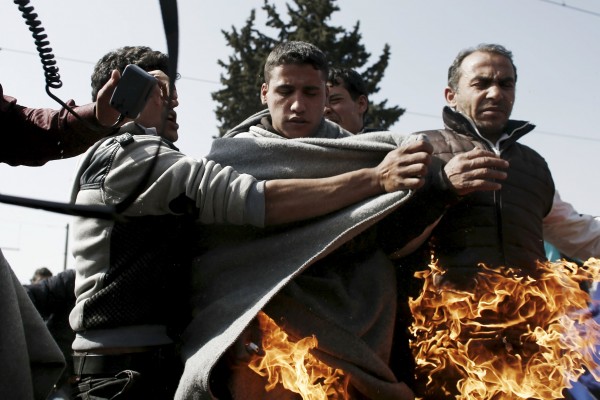 The action triggered tension among the other refugees who stated to chant “Open borders”.

Last night another man set poured fuel on his clothes, other refugees were quick to stop him from set himself on fire.

Another group fo some 50 refugees and migrants demonstrate with a sit-in on the rail tracks.

More than 13,000 people of several nationalities and refugee or migrant status insist on staying at Idomeni camp, despite repeated Greek government calls that they should move to “accommodation centers” set by the Greek Army across the country. They hope that the borders to FYROM will open and that they can reach Germany and other countries.

The government has repeatedly said that it “will not remove the people form Idomeni by force.”

PS I don’t know how long the Greek government will keep its violent-less approach, if troubles continue up there in Idomeni.