A Syrian man was transferred from Idomeni refugee camp to a hospital in nearby Kilkis and later to a hospital in Thessaloniki after he was most probably accidentally hit by a van of the Greek police. Immediately after the incident, refugees and migrants started to throw stones at the police van.

Reports about the accident are conflicting with some claiming the man was tramped by the car during a scuffle between refuges and police.

But in the video I saw, the man was very badly injured in the head.

According to police sources, the man fell from a stair [kind of] in front of the police van and he was not dragged by the vehicle. Despite the “accident nature” of the incident, refugees and migrants have gathered in front of riot police chanting slogans.

According to eyewitness and pictures from Idomeni, the man’s condition is considered as “critical.”

The man is a 40-year-old Syrian refugees living in Idomeni camp.

According to Athens News Agency, the atmosphere is tense.

No official statement by Greek police so far.

On Monday morning Greek police tried to clear the railway tracks from protesting refugees, who first went away but later returned to continue their protest.

PS the video I saw was very graphic that’s why I don’t upload it here. 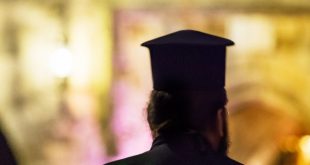