Greece has second highest defense spending in NATO after USA

WOW. Greece has the second highest rate in defense spending within the NATO after the USA. This comes from data released on Monday by the North Atlantic Alliance and refers to the period 2009-2016. 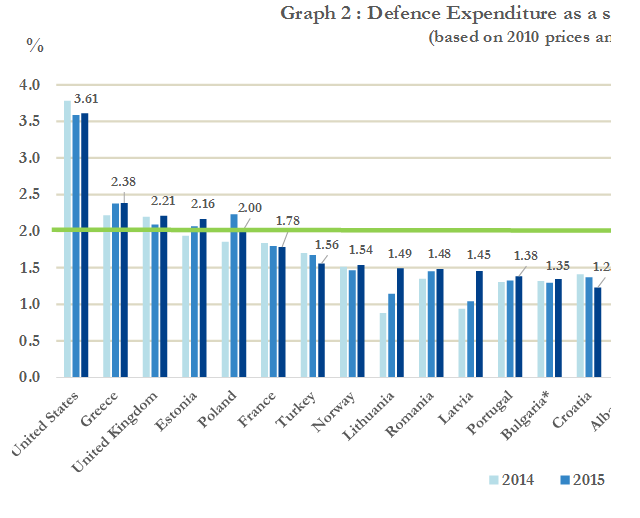 Greece is one of just five countries whose annual spending on defense exceeds 2 percent of Gross Domestic Product.

The country with the highest spending as a proportion of GDP is the US, with 3.61 percent, followed by Greece with 2.38 percent.

Next comes the UK with 2.21 percent, Estonia with 2.16 percent and Poland with 2 percent.

When talking about Austerity, then we talk right about all kind of austerity.

Apart from the fact that Greece suffered a sharp decline in GPD per Capita in the years of the crisis -and I’m not wrong by scrolling down the NATO Table -, Greece is the only country that suffered such a decline within the NATO. Not even Portugal or Spain that had to implement austerity cuts.

In its Press Release, NATO notes that

Each Allied country’s Ministry of Defence reports current and estimated future defence expenditure according to an agreed definition of defence expenditure, and represent payments actually made, or to be made, during the course of the fiscal year. It also makes use of up-to-date economic and demographic information available from the Directorate-General for Economic and Financial Affairs of the European Commission, and the Organisation for Economic Co-operation and Development. In view of the differences between this definition and national definitions, the figures shown may diverge considerably from those which are quoted by national authorities or given in national budgets. Research and development expenditures related to major equipment are included in equipment expenditures and pensions paid to retirees in personnel expenditures.

The cut-off date for information used in this report is 1 July 2016. Figures for 2016 are estimates.

NATO Data is here in pdf

PS ah, they are estimates… so I have chances to reach 22.5K until the end of the year 🙂