A fire broke out in an apartment without electricity seriously injuring a 4-year-old child. According to preliminary reports, authorities investigate whether the fire was caused by a makeshift ‘heating device’ or by a burning candle.

The fire broke out short after 8 o’ clock in the morning in an apartment in a suburb of Larissa in central Greece. The fire reportedly started next to the bed where the mother and the child were sleeping, injuring the mother and the toddler and destroyed the apartment before the fire brigades moved in. 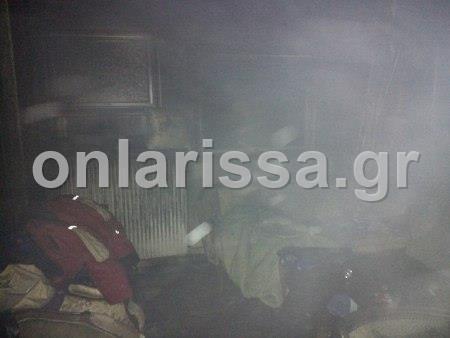 Bot, the mother and the child, were taken to local hospital.

The child suffered serious burn injuries and smoke poisoning and had to be  transferred to a hospital in the Greek capital, some 300 km away. His health condition is considered to be serious. According to latest media reports, the child has suffered burning injuries of  2. and 3. degree in the upper body and the head. 20& of his body is burned, he gets mechanical breathing support.

The mother whose condition is no causing concern was under shock and was not able to immediately tell investigators what caused the fire.

Firefighters investigating the cause of the fire had to make a tragic discovery:the power supply was cut.

Local media OnLarissa.gr reports that the small family was living without electricity since February 2016 – due to debts.

PS it always takes such tragedies to remind us that in Greece of 2016, people live their poverty drama in social isolation. It must be the fifth or sixth incident of such a kind since the beginning of the crisis in 2010.