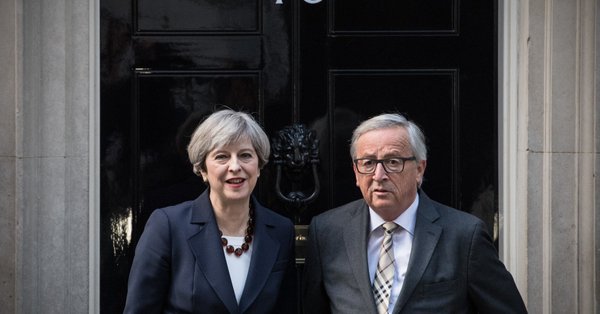 Leaders of EU27 adopt draft guidelines from Donald Tusk as European council says ‘firm and fair mandate’ now ready. The European Union leaders have unanimously agreed to tough negotiating guidelines for Brexit talks with the UK, suggesting that they will demand Britain agrees on payments to the bloc before considering a new trade deal.

The 27 leaders agreed to adopt Tusks’ guidelines less than 15 minutes into a special summit in Brussels on Saturday. The European council president tweeted that a “firm and fair political mandate” for the negotiations was now ready.

The EU is expected to demand that Britain resolves the key issues of  the rights of approximately 3 million EU citizens in UK,  the Brexit bill and the Irish border before any talks on a future trade deal between the UK and the EU can begin.

EU leaders are also set to back automatic EU membership for Northern Ireland if it votes in the future to reunify with Ireland.  The EU27 will also call for action to avoid a “hard border” between the Republic of Ireland and Northern Ireland, as fears persist that Brexit could undermine the peace process.

They will also call for Spain to have a say over any deal that affects Gibraltar in a document detailing the European council’s negotiating guidelines, which will set the broad political goals of the 27 states when talks start in June.

One of the most important key issues is the fate of 3 million EU citizens living in Britain and 1 million Britons on the continent, and what happens to their rights to work and claim benefits abroad.

Leaks suggest the leaders believe that any EU national who moves to the UK before the withdrawal date should have all the rights they would have expected in the past, including that of being able to enjoy permanent residency status once they have lived in the UK for five years, no matter when that period of residence begins.

A parliament report warned that Britons could lose health cover in Europe after Brexit. If Ehic provision is withdrawn, travellers with illnesses such as diabetes or cancer may be forced to spend thousands on insurance. Britons currently use the European health insurance card (Ehic). The inquiry heard evidence that losing this agreement could create challenges for many travellers, including disabled people and those with mental or physical health conditions.

Britain’s exit bill, estimated at around €60bn (£50.4bn), covering financial commitments made by the bloc during Britain’s time as a member.

Donald Tusk said ahead of the meeting on Saturday: “We all want a close and strong future relationship with the UK. There’s absolutely no question about it. But before discussing the future, we have to sort out our past. We will handle it with genuine care, but firmly. This is, I think, the only possible way to move forward.

“We also need solid guarantees for all citizens and their families who will be affected by Brexit, on both sides. This must be the number one priority for the EU and the UK.”

EU leaders and diplomats praised Saturday’s adoption of guidelines as an “act in EU unity.”

However, different countries have different priorities:

When it comes to citizens’ rights, for instance, countries such as Spain and Malta have a primary interest in the fate of British retirees who live in those countries, and the related costs for health care and other services. Countries such as Poland and Lithuania are far more concerned about their own citizens now living and working in the U.K., who send crucial remittances home.

Some EU countries, such as Belgium and the Netherlands, are nearly as eager as the U.K. to move to discussions on a future free trade agreement. France and Germany, the biggest economies of the 27, can afford to demand that Britain feel some pain from leaving the EU’s single market.

Adopting a tough stance on UK is the total tool in the hands of Brussels to scare to death other members that might even play with the idea to leave the outdated EU.

PS North Ireland has more chances to break away from the UK than Scotland, I ‘m afraid….