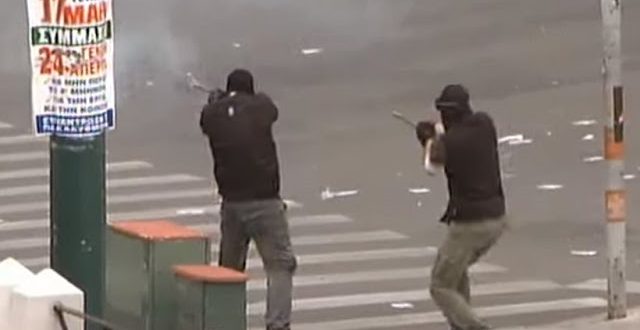 May 17, 2017 Greece, Politics, Uncategorized Comments Off on Police fires teargas at rioters during anti-austerity protest on general strike day 489 Views

Police fired teargas at rioters during the big anti-austerity protest in downtown Athens on Wednesday. Thousands joined the unions rally on the day of the general strike. 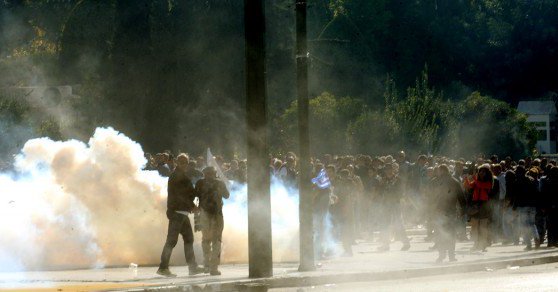 People wearing hoods started to throw stones at riot police squads when the big rally of unions and political parties reached the building of the Greek parliament at Syntagma Square in downtown Athens.

The respond of the police was prompt. It started to fire teargas at the rioters.

They responded with molotov cocktails and even used bats to attack police.

Within minutes the area around the Syntagma square and outside the Grand Bretania Hotel had turned into a battle field.

According to media, the incidents were started by a group of some 100 people wearing hoods and helmets.

The hoodies were apparently at the end of the protest rally organized by the public and private sector unions. After the clashes with police, they reportedly left the area and moved towards the Exarchia district.

Earlier, the van of a private television station covering the anti-austerity protest rally was reportedly attacked and damaged by unknown perpetrators.

Shop windows have been damaged.

Anti-authoritarians expressed their frustration also in other cities across the country.

In Thessaloniki, unknown perpetrators threw fresh paint at the walls of the Commercial and Industrial Chamber.

Earlier, they had sprayed slogans on the walls of shops in the city’s main commercial street. the slogans read: “Smash, Set on Fire, have Fun”

In Chania on the island of Crete, unionists and students almost clashed with each other arguing which banner should lead the anti-austerity march.

Thousands joint the anti-austerity protests across the country a day before the lawmakers of Greece’s coalition government left-wing SYRIZA and nationalists Independent Greeks will vote in favor of a new austerity package worth 4.9billion euros for the years 2-18-2021.

The country has paralyzed due to a 24-hour general strike on May 17 2017. Public services remained closed and hospitals operate with emergency staff.

Unions call for a protest rally outside the Parliament at  7 pm on Thursday, May 18 2017.