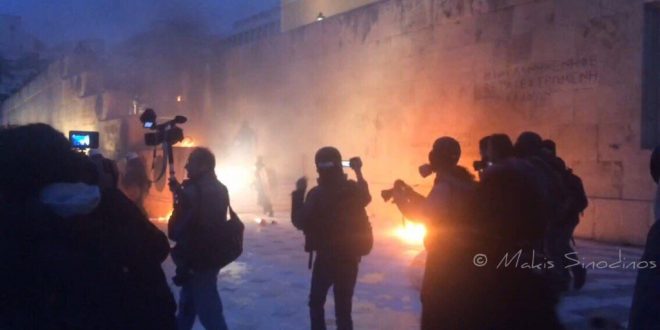 On the second day of anti-austerity protests, anti-authoritarians clashed with police outside the Parliament in Athens, short before the left-wing/nationalists coalition government voted for more austerity measures. Thousands unionists, students, members of leftist parties, engineers, lawyers and unemployed and self-employed flocked outside the Greek Parliament on Thursday afternoon to protest the new austerity bill that government lawmakers will vote for after midnight.

Holding banners and placards, young and old from all ages shouted a loud NO to the new cuts in wages, pensions, welfare benefits and allowances, on the second day of anti-austerity protests.

The peaceful protest turned ugly short after 8:30 in the evening, when groups of anti-authoritarians anarchists started to demolish whatever they stumbled upon.

It all started with the usual attack against riot police around the Parliament.

The anarchists attempted to enter the Parliament and climbed the stairs. They clashed with police.

The clashes started short before 9 o’ clock in the evening, when a group of some 50 anarchists mingled with the unions’ protest.

They set one of the Evzones guards posts on fire. The Evzones are guards on 24-hour basis in front of the Monument of the Unknown Soldier.

So far, police has arrested one person and detained two. They were found to be in possession of a hammer and an axe.

There are reports that anti-authoritarians also beat a camera crew.

During the protest of the unions earlier, one protester set a flag of  SYRIZA on fire.

In Thessaloniki, where another unionists’ protest was taking place, people wearing hoods beat a traffic policeman and set his motorcycle on fire.

They have reportedly set a flag of the European Union on fire.

The clashes have concluded, the unionists went home and the debates inside the parliament continues.

PS We have seen this film many times since 2010. 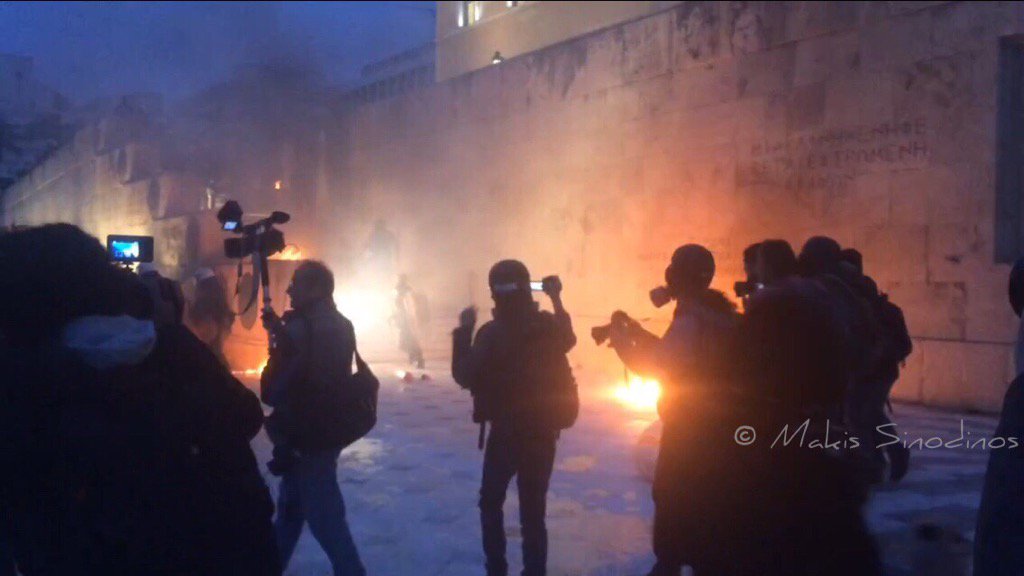