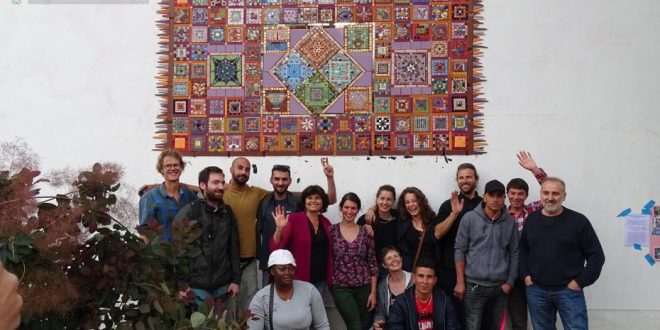 Magic Carpet: A handmade gift by refugees and migrants to Lesvos

May 19, 2017 Refugees Comments Off on Magic Carpet: A handmade gift by refugees and migrants to Lesvos 1,109 Views

A large “magic carpet” decorates since Thursday the wall of the Municipality Theater of Mytilene on the island of Lesvos since Thursday. Under the guidance of two exceptional artists from Greece and France, forty refugees and migrants as well as ten volunteers from different countries joined their forces to create a symbol for unity.

The whole project was organized and implemented by Kalliope Kalaitzidou from Callipope Mosaics and French artist Valerie Nikoladze from Esprit Mosaique.

The creation was supported by the municipality of Lesbos and was funded by the Swiss Cross, Esprit Mosaique and NGO “ILIATIDA”.

Everyone who participated in the project, every man, woman or child, made one or more squares with mosaics depicting their own culture but also elements of the civilization of Lesvos.

The frames were finally joined together to create a real “magic carpet”, a mosaic of people and cultures.

The magic carpet became a reality with the participation of forty refugees and migrants from Algeria, Morocco, Syria, Nigeria, Ethiopia, Sierra Leone, Afghanistan, Iraq, Burundi, Egypt and other countries, who spend a period of time on the island.

The support team was ten volunteers form several countries who work with refugees on the island of Lesvos.

“it is a gift from all these people to the city of Mytilene, the city that became an international reference point from 2015 onwards, ” Kalliopi Kalaitzidou told Greek media (lesvosnews.net).