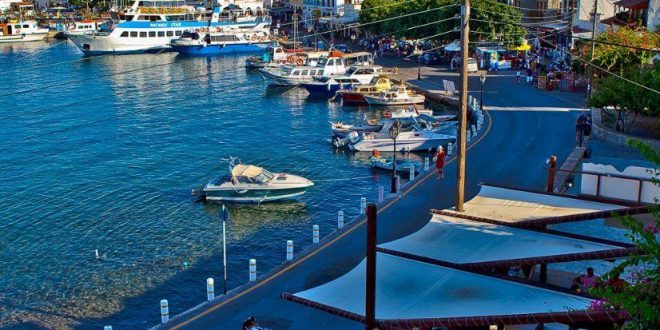 A local shop-owner beat tax officers conducting audits on the island of Patmos, Dodecanese, on Saturday.  It needed the intervention of two ministers so that local authorities detain the perpetrator.

The three tax auditors had arrived on the island of Apocalypse in the context a ‘tax evasion safari’ launched by the Greek finance ministry authorities especially in tourist areas and islands across the country.

The auditors in Patmos denounced that one local shop-owner beat in the head one of them in the middle of the street.

According to private ANT1 TV, the three tax auditors were walking on a street near the port when a man approached them and asked whether they were tax auditors. The moment the youngest of the three replied positive, the man started to punch the auditor’s head and slap him on the face.

When the ta auditors asked the policemen to arrest the attacker, they were informed that police was not in charge of the case as the incident occurred in the zone where the Coast Guard is in charge.

The auditors turned to the Coast Guard to hear they were not in charge either.

For one hour, police and coast guard were throwing the ball in each other’s court, until the tax auditors lost their patience and informed their supervisor in Athens. The chief for tax audits called the ministers for Maritime and Public Order and asked them to clear the issue on who is in charge for what.

Finally, the Coast Guard detained the perpetrator whom they found enjoying his coffee in one of the most famous cafes in Skala. He was brought to prosecutor, spend the night in custody and was released while a date for his trial was determined.

According to local PatmosTimes, the attacker with initials K.G. from Kampos showed to authorities a paper confirming that he was treated in a psychiatric clinic. the local newspaper notes further that the man beat two tax auditors, one man and one woman.

The mayor tried to downgrade the incident. He told Ant1 TV the attacker man was receiving medical treatment and that police and coast guard worked in harmony with each other.

The beaten tax auditor received first aid at the health center of Patmos and returned to the island of Rhodes for further medical checks as the head pain persists. He filed a law suit against the attacker.

Tax evasion in touristic areas is a real plaque for the state revenues, but many locals do not seem to care. some of them claim they work for just a couple of months per year and therefore they need to earn enough to live on the whole year.

In a raid last week, tax auditors found out that a businessman on Gaidouronisi (Donkey island) near Crete, had issued 22,100 fake receipts. He was running four canteens operating with 8 cash registers. Bingo! Auditors found out the tricky businessman was using the tax number of businesses that had closed long ago. The establishment that was bringing profit through the fake receipts was closed down and demolished by authorities.

Now the finance ministry is working on an Application, where customers can immediately control whether the issued receipts are fake or real.