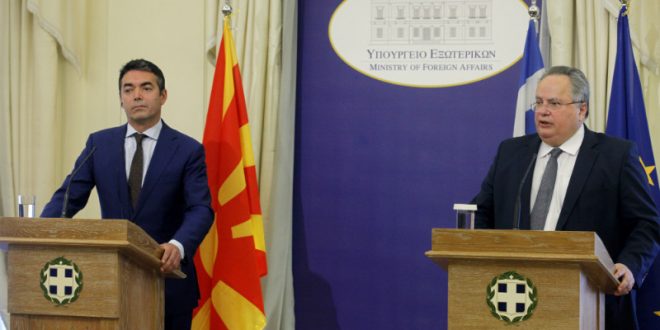 The government of Former Yugoslavia Republic of Macedonia (FYROM) is  mulling plan to hold a national referendum over the name dispute with Greece, deeming that it would be better if citizens decided whether to accept a new name, as a compromise with Greece, local media reported Thursday.

It seems that government and all political actors here are in favor of this option as the best way to find a solution to long-term pending issues that exist between the two countries.

A few days ago, mediators of Macedonia and Greece over the name issue, Vasko Naumovski and Adamantios Vassilakis, met the United Nations negotiator, Mathew Nimetz, in Brussels and discussed ways how to enhance cooperation and reach a deal but no new name was put on the negotiations table.

Macedonia is the name of a northern province in Greece and Athens is worried that the use of the same name by the neighboring state could lead to territorial claims.

“In this phase, we still don’t have a solution. However, as it has been said more than once, it is necessary to have a referendum,” the government’s spokesman, Mile Bosnjakovski told reporters Thursday.

FYROM’s Foreign Minister Nikola Dimitrov said that referendum was part of the electoral programs of all major political parties so it was a pre-electoral pledge that should be kept.

While stressing the need for national consensus, he said that in order for a solution to be long-term, the citizens must have their say.

“The name issue with Greece is an issue that can’t be solved without the citizens’ say,” Dimitrov told reporters.

The largest opposition party, VMRO-DPMNE, has sought a national referendum saying that the decision for the solution of the name dispute was not the prerogative of any political party, but a prerogative of the citizens who should decide through a referendum.

The month of January will mark the continuation of talks between Skopje and Athens to find a compromise on the issue of the name, through the support of the UN negotiator, Mathew Nimetz.

The referendum plan was also announced in last July.