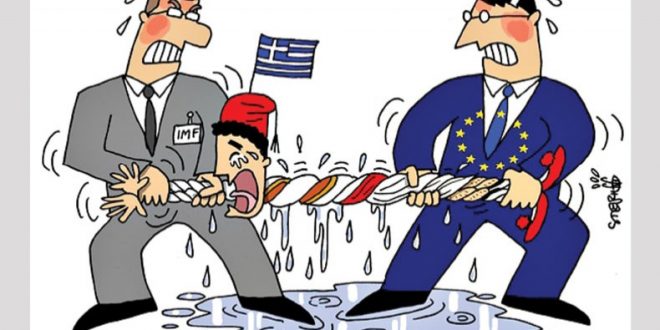 A draft report prepared by the European Commission on Greece’s compliance with the bailout agreement requirements and the sustainability of the Greek debt, suggests that Greece would have to implement some austerity measures originally scheduled for 2020 a year earlier. This would happen if creditors see that the primary surplus target of 3.5% in 2019 is beyond reach. “and this would mean that lowering of the tax-free basis would be implemented already in 2019, Greek media interpret the Commission analysis.  Lowering the tax basis would mean that the poor with less than 6,000 euro annual income will be taxed as well.

According to Bloomberg, the analysis of the sustainability of  Greece’s debt foresees a worse trajectory for the country’s debt than what was expected a few months ago.

The slightly worse debt trajectory underscores the likelihood that a final debt-sustainability analysis at the end of Greece’s program will confirm the need for further re-profiling of Greece loans, especially if economic growth lags.

What’s more, in its analysis the commission raises questions about whether the foreseen size of Greece’s cash buffer should be reassessed, with the planned 10.2 billion-euro cushion only covering financing needs of less than 10 months following the end of Greece’s bailout — an amount that could increase with future market issuances and progress in cash management reform.

According to Bloomberg, creditors have little intention to allow Greeks go ahead without supervision, once the bailout program exits in summer 2018.

Meanwhile, euro zone finance ministers meet in Brussels under the new Eurogroup chief Mario Centeno from Portugal. They are expected to conclude the third review but postpone the release of the bailout tranche estimated at 6-7 billion euros, until Greece has completed all required milestones, by February.

PS so the Commission put pressure on Greece to accept primary surpluses of 3.5%, not it was target is hardly achievable. And who is to blame for this? The Greeks, of course.