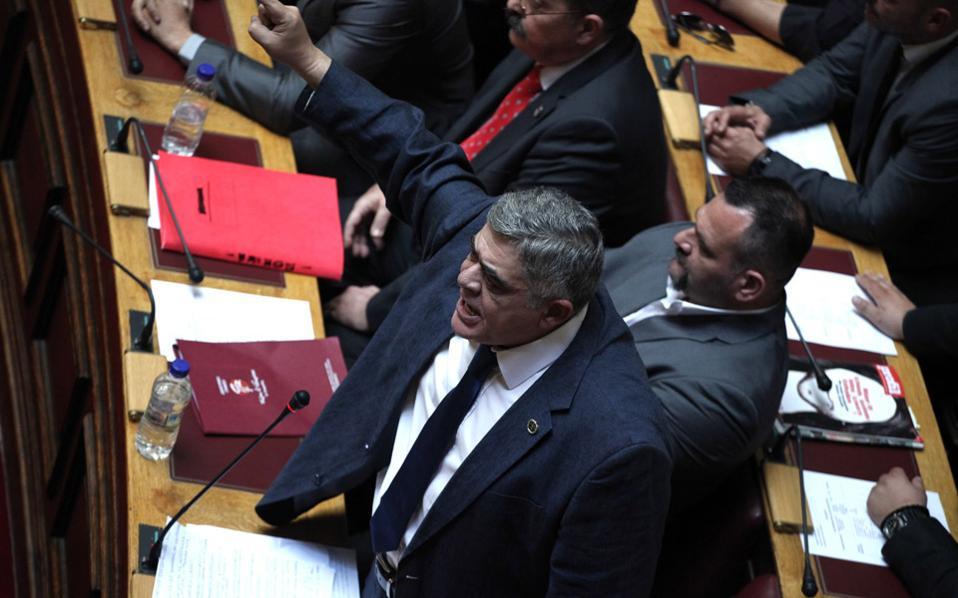 An Athens court sentenced the leader of extreme-right Golden Dawn, Nikos Michaloliakos, to 8 months imprisonment for incitement to commit crimes. The sentence is suspended for three years. In a public speech on 3. Sept 2011, Michaloliakos threatened his political opponents saying “we would smash their heads.”  he had also said “Yes! With fascists, with Nazis, criminals and stabbers, whatever they want. But not with traitors and two-faced people!”

According to daily Efimerida Ton Syntakton, the trial had undergone several postponements as the defendant’s lawyers tried to mislead the court as for the time the offense was conducted and trying to achieve “statute of limitation.”

The court finally sentenced Michaloliakos on Friday to an 8-month sentence suspended for three years. the charge was “Incitement to crime, violent acts and disunity.”

In a separate case, the Appeals Court in Athens sentenced Golden Dawn MP, Ioannis Sahinidis,  to 12 months suspended sentence on Friday. During a Palriament debate about the Budget in 2015, Sahinidis had named MP Liana Kanneli (Communist party KKE) as being the “instigator of the murder of two GD members in Neo Irakleio” in 2013. He was sued for defamation.

Meanwhile the trial against 69 defendants. among them 18 GD MPs, continues. the Golden Dawn trial started in April 2015.  The major accusation is based on Article 187 par. 1 of the Greek Criminal Code that defines the nature of a criminal organisation. Besides this, three more serious criminal offenses are also bought before the court: the murder of Pavlos Fyssas, an anti-fascist rapper; an assassination attempt on Abuzid Embarac, an Egyptian worker; and assassination attempts on members of the Greek Communist Party.

By the end of 2107, 210 days of trial had already elapsed, the hearings continue also in 2018. After initial delays due to technicalities like a proper court room for such a high number of defendants the trial continue in what it seems a smooth way. The number of witnesses is also big. The trial is expected to conclude within 2018. More about the Golden Dawn trial here.