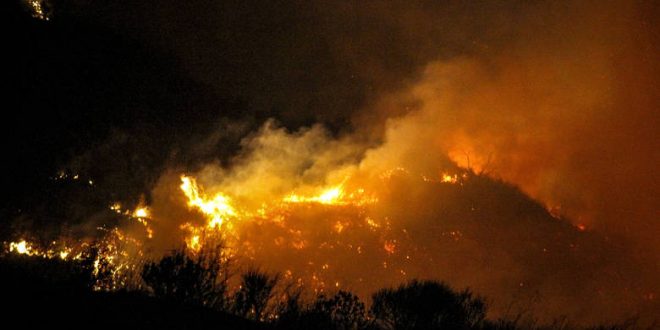 Villages evacuated at night as wildfires rage in Ilia (videos)

April 16, 2018 environment Comments Off on Villages evacuated at night as wildfires rage in Ilia (videos) 363 Views

Firefighters worked all through the night, and areal means started operation early Monday morning to take the raging wildfire in the areas of Frixa and Skyllountia, in Ilia Peloponnese,  under control. The fire broke out on Sunday afternoon near the archaeological site of Olympia, the birthplace of the ancient Olympic Games.

The wildfire broke out on Sunday afternoon near the archaeological site of Olympia, the birthplace of the ancient Olympic Games.

Fore than 70 firefighters and three helicopters and as well as locals tried to contain the blaze but their efforts were hampered by the very strong wind blowing in the area with intensity of 8 Beaufort.

While the site was not threatened, two villages were evacuated as a precautionary measure, the Fire Service said in a statement.

The blaze reached the yards of two houses and caused damages on the roof of one.

However,  Deputy local government, Giorgos Georgiopoulos, told news agency amna.gr that a lot of agricultural land including olive groves were burned down. The governor said that wind intensity was lower on Monday morning helping the efforts to take the blaze under control. A slight rain in the early morning hours fell.

The deputy governor blamed locals for the fire saying that some locals tried to burn olive branches. He added, he had advised  local to not proceed with the burning of dry branches and greens over the weekend due to the meteorological forecast. “Six fires broke out in Ilia on Sunday,” he added.

The razing wildfire woke up the painful memories of summer 2007, when more than 70 people were killed due to wildfires in the same area.

Every year in summer wildfires burn down thousands of acres of forest and agricultural land. Most of the wildfires are caused by negligence, despite warnings by the Civil protection and local authorities. But some are also caused with the purpose to make forest land available for construction. Although the new forest legislation makes it more and more difficult.