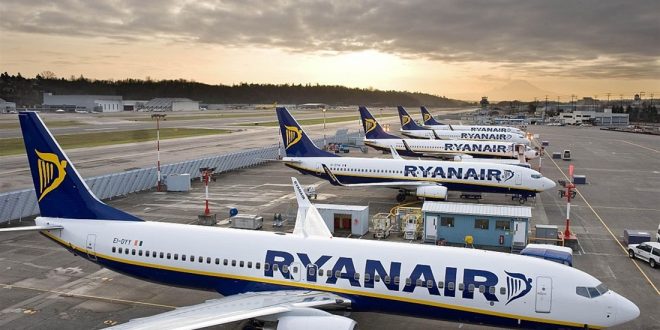 Travel disruption ahead for thousands of holidaymakers as pilots in Ireland working at Ryanair confirm that industrial action is set to take place on July 12th 2018. Almost 100 pilots are expected to participate in the strike that takes place at the peak of the tourist season. Ryanair says the vast majority of its flights on 12 July will be unaffected, because 93 per cent of services do not operate to or from Ireland.

There will be further disruption to holidaymakers in the coming weeks ahead as pilots at one of the country’s biggest airlines have overwhelmingly voted in favour of strike action.

Following a ballot members of the Irish Air Line Pilots’ Association have confirmed that they will hold a 24 your stoppage on July 12th.

It is believed the call for industrial action comes pilots working for the airline say their demands over pay and conditions are not being taken seriously by management at the company.

The latest strike which will likely cause widespread travel disruption to thousands, could potentially become even worse as many pilots working for the company across the continent are considering taking similar action.

Ryanair  employs directly around 100 pilots in Ireland, with about 200 more on personal services contracts.

While contracted pilots are expected to work normally, a majority of directly employed cockpit crew are captains – potentially increasing the impact of the strike.

Almost 100 pilots working for Ryanair in Ireland will stop work on 12 July, with the threat of more strikes to come.

“The biggest effect on UK travellers is likely to be on Irish Sea services from Dublin, Cork and Shannon to British airports. But Ryanair is likely to be considering options for deploying pilots from other bases around Europe,” notes The Independent.

Members of the Irish Air Line Pilots’ Association (IALPA) are engaged in a dispute over arrangements for transferring flight crew between European and north African bases as well as seniority and annual leave arrangements.

The union said its request for talks on the issue “had been met with a threat to move Dublin-based aircraft and pilots to other airports and cut promotion opportunities”.