We all know that being spiteful is a bottomless pit. And it is confirmed for one more time on the day where Greece mourns at least 50 people among them many children, dozens of injured and missing. People who lost their lives in the Greek tragedy called “Athens wildfires.” This time the confirmation of being as spiteful as possible till the end of your days comes from the lips of a man who claims to be one of the Holy Men of the Greek Orthodox Church, no other than  Metropolit Amvrosios.

The holy man with endless hate in his soul was not ashamed to claim that the wildfires were the wrath of God for an atheist prime minister.

“Atheist Prime Minister Alexis Tsipras draws the wrath of God,” Amvrosios writes in capital letters  his blog on Tuesday afternoon and adds “Greece is damaged from rain and fire!”

Describing Tsipras as “hypocrite” for having interrupted his visit to Bosnia to return to Athens on Monday night, Amvrosios writes

the atheists of SYRIZA are the causes of the general disaster! their atheism draws the wrath of God!

some extraordinary natural events hit our country destroying properties and people! In the 80 years of my life I don’t remember such an unprecedented general disaster in our country!

Citing the Holy Spirit as quoted in the New Testament Amvrosios notes his conclusions:

“In times of distance from the path of God will manifest his wrath with  various natural catastrophic events such as earthquakes, famine, epidemics and illness pestiferous, bloodshed, criminality, devastating fires, smoke cloud that will go up to the sky!

Who, I wonder, is responsible for distancing the Modern Greek from God’s path? Who else? The atheist Prime Minister, Mr. Alexios Tsipras and his Associates: Here are some of their accomplishments,” Amvrosios writes and posts a long list of ‘atheism’ achievements.

He starts from the fact that Tsipras has neither “baptized his children” nor “married his girl-friend.”

Then he accuses the prime minister and the Associates for having abolished the religious oath for cabinets ministers (not true!), removed Crosses and Icons from schools and public institutions, have scrapped the morning prayers in schools,  legalized civil partnerships for same-sex couples and allowing pride parades, spread nudism and immorality, and also criminality of anarchists’ Rouvikonas.

The list is long but who wants to read the Seven and One Plagues of Greece and their causes on such a day? Especially when the list is written by a man who has never heard of climate change and who loves to lay human responsibility and negligence rather in the hands of an invisible and unproven superior power like God.

By a man who in fact forgets the wildfire disaster in Ilia in 2007, where 84 people lost their lives. 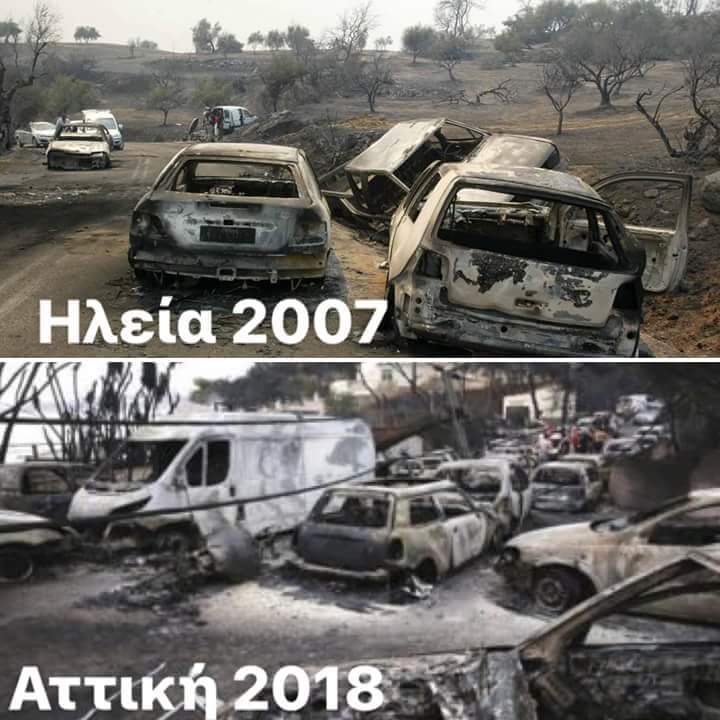 But in 2007, it was conservative and in generally religious New Democracy in power, and therefore the ‘holy man’ does not include in his famous List of Evil.

At least, he could be silent in respect of the victims and their mourning families. But not. Not him.

PS I vaguely remember some bishop claimed the same thing when 25 people lost their lives in the flash floods in Mandra in November 2017. Not 99% sure it was Amvrosios – but I wouldn’t be surprised if he was. Not time to check with my archives right now.