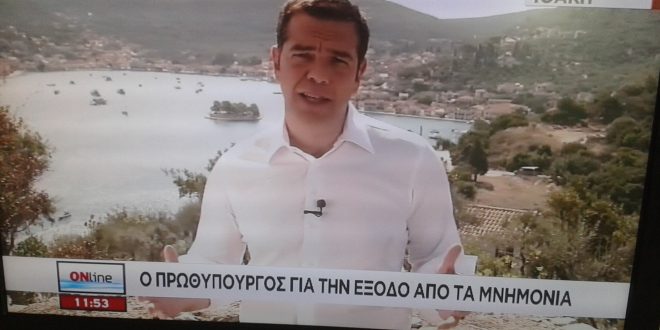 “Ithaca is just the beginning,” Greek Prime Minister Alexis Tsipras said in his address to the nation on the occasion of the country exiting the bailout program. He practically confused the Greeks who always believed that Ithaca in the Ionian Sea is the symbol for the end of the 10-year troubled journey of Odysseus through the monsters of  Ancient Greece.

However, we live in modern times, and any prime minister can give his own explanation of a Greek myth. It is the beginning of a new era after 8 years of bailout programs.

“Today is a redemption day and the beginning of a new era,” Tsipras said in his pre-recorded message with the picturesque island on the background.

“We will not forget what we have experienced. This is the equipment of a country that is writing its own history,” he added.

Tsipras speech was full of metaphors based on Homer’s Odyssey.

“The modern Odyssey our country went through since 2010 has come to an end, the memoranda [bailout agreements] have finally ended, our country regains its right to define this future. We left behind the Clashing Rocks,” Tsipras said.

“Greece has experienced its modern Odyssey since 2010,” the Prime Minitser said a made a short review.

“Within five years, unprecedented things happened for a country in times of peace,”

“The government had gone through the mandate it received three and a half years ago with only one certainty: To take the country out of the tightness of the memorandums and the endless austerity, a course through many waves,” Tsipras said.

“We will not forget the taxation immunity of  big wealth, the general interweaving and corruption, the immunity towards a number of businesses and publishing groups that considered the country belong to them, the cynicism and contempt of a political elite that thought Greece was its feud and Greeks its obedient subjects,” Tsipras said.

Following Odysseus step by step and the Odyssey chapter by chapter, the Greek Prime Minister spoke of  “Laestrygonians and Cyclopes” and sea monsters, of Sirens of vanity.

“We reached our destination, we exited the bailout programs, but we are fully aware that things have not ended here. New battles are laying ahead,” Tsipras said adding “the modern Suitors are here and stand opposite to us.”

He described as Suitors “those who want to see the ship in the sea again and the people back int the hold. It is those who create a Greece according to their own image and likeness, the Greece of corruption, interdependence and of the power of the few. Those who want to keep up with tax evasion, infringing on the public interest, having their off shore and their deposits abroad. Those who consider themselves above any law and the rule of law and are trembling in the idea of an independent justice.”

“Ithaca is just the beginning,” Tsipras said in his address to the nation and sent a clear message that it was the political and business elite that caused the economic crisis and should be kept out of power.

I have no idea how Tsipras will manage to get rid of the Suitors because slaying is no longer a contemporary method eliminate your enemies.

In his next speech, let’s say before the elections he may use some chapters from Iliad and how he won another 10-year-old battle.

PS Once in Ithaca, Tsipras could also pay a short visit to nearby Corfu….