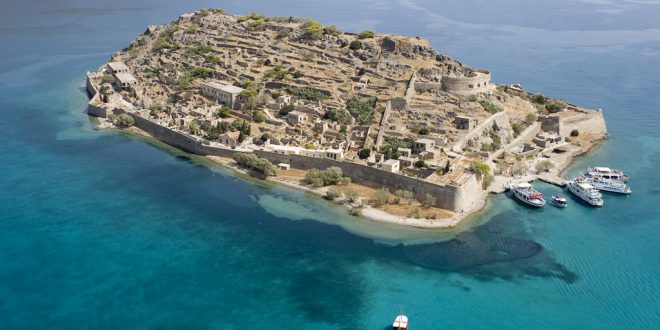 Authorities have reported a mysterious robbery on the tiny uninhabited island of Spinalonga off NE Crete that was once used as a leper colony. The island is visited daily by thousands of tourists and the ticket revenues were left in a safe yet unguarded.

The robbers arrived at the island by boat, broke into the guards’ room and into the safe and left with an amount estimated between 19,000 and 50,000 euros.

The robber reportedly took place in the night  between 26th and 27th August and thus under the light of the full moon.

Police said Monday that power tools were used to break into the archaeological site at the tiny uninhabited island of Spinalonga over the weekend.

Local media reported that the island has no electricity and therefore there is no alarm system for the safe.

In the months of July and August, an average of 4,000 people visit Spinalonga on a daily basis.

The revenues from Saturday and Sunday were apparently in the safe, local media report.

When the two guards leave with the last boat at 6:30 p.m. the site remains unguarded.

State television reported that some 50,000 euros had been stolen. Authorities have not confirmed the missing amount.

It is the first time that a robbery takes place on the tiny islands and locals suggest that the robbers knew the place and the safe storage area very well but also that the revenues remain on the island.

Police has not leaked more information on the case as investigation continues.

The 8-ha big island is located in the Gulf of Elounda, in north-eastern Crete in the Prefecture of Lasithi.

Originally, Spinalonga was not an island – it was part of the island of Crete. During Venetian occupation the island was carved out of the coast for defence purposes and a fort was built there.

The island was used as a leper colony from 1903 to 1957. It is notable for being one of the last active leper colonies in Europe.

The last inhabitant, a priest, left the island in 1962.

Nowadays, the uninhabited island is a popular tourist attraction in Crete. In addition to the abandoned leper colony and the 400-year-old Venetian fortress, Spinalonga is known for its small pebble beaches and shallow waters.

There is no accommodation on Spinalonga, meaning all boat tours from Crete last only a few hours.

Last year, nearly 400,000 day-trippers visited Spinalonga, which is accessed only by boat from the nearby island of Crete.

Spinalonga was also the setting of the popular 2005 historical novel “The Island” by British author Victoria Hislop.