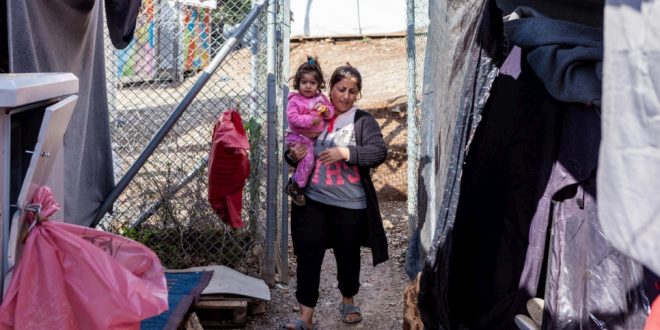 UNHCR, the UN Refugee Agency is urging the Government of Greece to address the situation in Aegean Sea Reception and Identification Centres (RICs), commonly known as ‘hotspots’.

In a briefing a the Palais des Nations in Geneva on Friday, UNHCR spokesperson Charlie Yaxley said among others that the refugee centers are “severely overcrowded.”

This means that thousands of asylum-seekers and migrants, including many children, live in squalid, inadequate and rapidly deteriorating conditions. Some have been living in these centres for more than six months.

UNHCR calls on the authorities to rapidly accelerate procedures for those eligible for transfer to the mainland; to increase reception capacity on the mainland to host them; quickly improve conditions in reception centres and provide alternative accommodation for the most vulnerable.

The situation is reaching boiling point at the Moria RIC on the island of Lesvos, where more than 7,000 asylum-seekers and migrants are crammed into shelters built to accommodate just 2,000 people. A quarter of those are children.

An estimated 2,700 people, mainly Syrian and Iraqi families, are staying at the Vathy RIC on Samos, originally designed to hold less than 700. This is forcing many to stay in flimsy tents and makeshift shelters. This is likely to become a serious concern if not addressed before winter sets in. People in need of medical attention are being forced to queue for hours before receiving treatment.

Reception centres on the islands of Chios and Kos are close to double their intended capacity.

These levels of overcrowding have not been seen since March 2016, when arrival rates were far higher. Limited access to services prevails across all the RICs. UNHCR is particularly concerned about woefully inadequate sanitary facilities, fighting amongst frustrated communities, rising levels of sexual harassment and assaults and the increasing need for medical and psycho-social care. UNHCR commends the hospitality shown by local communities and is aware of the impact of this situation on them.

Children, including hundreds of unaccompanied boys and girls, are particularly at risk, as well as dozens of pregnant women, new-born babies, survivors of sexual violence, and other extremely vulnerable people.

More than 3,000 asylum seekers on the islands have been given authorisation to move to the mainland, but transfers have been slow due to the lack of sufficient accommodation and reception on the mainland. Some 1,350 asylum-seekers were transferred to the mainland in August however, this is failing to ease the pressure as more people continue to arrive on the islands. An average of 114 people arrived each day in August, up from 83 in July. More than 70% are families from Syria, Iraq and Afghanistan.

Despite receiving European funding, the Government has faced challenges in delivering on previous commitments to decongest the RICs on the islands. UNHCR urges the authorities to strengthen efforts to overcome administrative and logistical delays. In the meantime, extraordinary measures need to be considered, including the use of emergency accommodation or other alternative facilities – as well as encouraging the authorities to work closely with civil society and non-governmental organisations in specific areas such as delivering health care.

UNHCR remains ready to support the Greek authorities with building capacity and strengthening its operational response as well as with transfers of eligible people to the mainland. At the request of the government, UNHCR has exceptionally agreed to continue its support in transport of asylum-seekers to the mainland in September in order to avoid further delays.