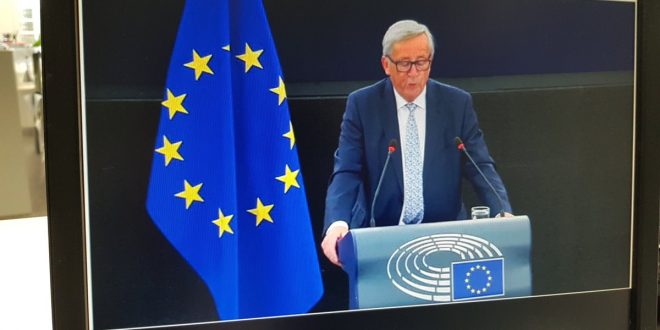 Addressing the EP on Wednesday morning and delivering his annual State of the Union speech, Juncker noted that Greece has succeeded in concluding the stability program and can stand on its own feet again.

“We must hail the Greek people’s Herculean efforts, efforts that some Europeans still continue to underestimate,” he said. “I always supported Greece, its dignity and its role in Europe, and specifically its remaining in the eurozone. I am proud of all these things,” he added.

“We respect the British decision to leave our union.”

“But we also ask the British government to understand that someone who leaves the union cannot be in the same privileged position as a member state.”

“If you leave the Union, you are of course no longer part of our single market, and certainly not only in the parts of it you choose.”

“We want to find solutions that prevent a hard border in Northern Ireland.”

“The Commission will not stand by when the rule of law is attacked.”

“Article 7* must be applied whenever the rule of law is threatened.”

“Judgments from the Court of Justice must be respected and implemented. The EU is a community of law and respecting the rule of law and abiding by court decisions are not an option but obligation.”

“Member states don’t yet have the right proportion between responsibility for their own sovereignty and the necessary solidarity amongst themselves.”

“This solidarity must be provided by member states if they want to retain the Schengen area without internal borders. I am and remain against internal borders. Where they now exist, they must be removed. If they remain, they should be an unacceptable backwards step in Europe.”

“I call on the Austrian Council Presidency to make decisive steps so that we have proper solutions for a balanced reform of the asylum system.”

“We can’t be talking every time about ad-hoc solutions for the people on board. Ad-hoc solutions are not adequate, we need more solidarity and it must be organized.”

There will be “new rules to get terrorist content off the web within one hour”.

Internet platforms will be required to develop new methods to police content but it is unclear what form those would take.

The written proposal states that net firms that fail to comply would face fines of up to 4% of their annual global turnover.

“Europe’s economy has now grown for 21 consecutive quarters… Never have so many men and women – 239 million people – been in work in Europe.”

“Clock-changing must stop. Member States should themselves decide whether their citizens live in summer or winter time.”

The next elections to the European parliament are expected to be held in late May 2019.

*Right after his speech, the EU parliament voted in favor of taking disciplinary procedures against Hungary for breaching core democratic values. The commission has already launched disciplinary proceedings against Poland over reforms it says challenge the rule of law.

The next elections to the European parliament are expected to be held in late May next year.

Just between you and me: I’d rather have our esteemed European friends and creditors cut some of the tax burden than hail my efforts to be a magician and try to create an extra 20- or 50-euro banknote out of nothing.