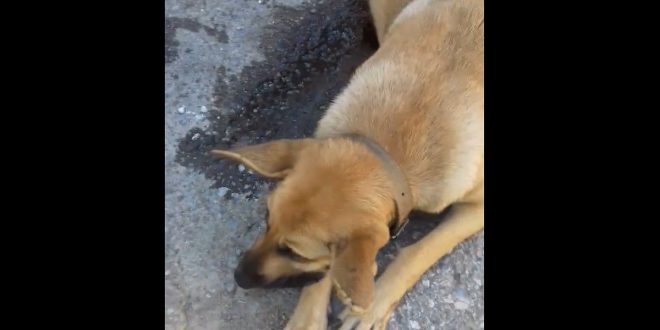 World Animal Day sadly reminds of the challenge Greece face in terms of animal abuse. It was just on the even of this special day, when somebody fatally shot a pregnant dog.

The dog did not particularly belonged to anyone, was rather a stray in the village of Pantelari, Chania on the island of Crete. She was fed and taken care of by locals, somebody had even passed a collar around her neck.

But someone else, a sociopath, was apparently disturbed by the presence of the dog, maybe of any stray dog, particularly of a pregnant dog.

He took a rifle and shot at at her, causing fatal injuries in her spleen, uterus and other internal organs and killed the fetuses.

The pregnant dog was still alive when she was found by the locals who informed the mayor of Pantelari and the local animal welfare society.

The bleeding animal was rushed to the nearest vet’s clinic.

The dog died during the surgery.

The cruelty triggered an outrage, a businessman offered the amount of 2,000 euros as reward to those providing information that will lead to the arrest of the perpetrator or perpetrators.

The society “Animal and Environment Action” made known of the reward on its Facebook Page.

The dog was shot five times.

It was just ten ten days earlier, also a dew weeks earlier, when other perpetrators in Crete put a dog and her puppies into a furnace and started a fire.

Although in small villages everyone knows everyone the perpetrator/s has not been found yet.

Maybe the rewards will help this time.

Animal abuse on the island of Crete is being reported almost on a daily basis and local and authorities should start to look into the problem seriously.

Who wants to live with so many seek people around?