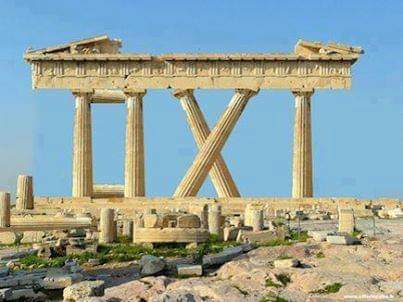 With military parades, patriotic songs and pride Greeks celebrate the day that went to history as the OXI Day. It is the day Greece said NO to Italian invasion of Greece on 28. October 1940, that marked the beginning of the Greek-Italian war and ended in occupation by the axis forces until 1944. Oxi Day is the Greece said NO to fascism and nazism.

At 3 a.m. on the morning of October 28th, 1940, Emanuele Grazzi, the Italian ambassador to Greece, delivered an ultimatum from Benito Mussolini to Prime Minister Ioannis Metaxas.  Il Duce demanded that Metaxas allow the Italian army free passage to enter and occupy strategic sites in Greece unopposed.

Faced with this demand, Metaxas delivered an unequivocal response in French, the diplomatic language of the day, “Alors, c’est la guerre.”  This brief phrase, “Then, it is war,” was quickly transmuted into the laconic “Oxi,” the Greek for No, by the citizens of Athens.

The day is stamped in the memory of millions of Greeks in the country and abroad as the Oxi Day.

The irony of the story is that Metaxas who staged a coup, initially favored Nazi Germany, while King George II was a confirmed anglophile.  Italy’s intervention provided the excuse for the king to push his Prime Minister toward closer relations with Britain. After rejecting the Italian demands, Metaxas addressed the Greeks.

Video: Metaxas historical address to the Nation – with EN subtitles

At 5:30 a.m., before the ultimatum had even expired, the Italian army poured over the Greek-Albanian border into the steep Pindos mountains in North-West Greece. Italy was occupying Albania since 1939, and for this reason Metaxas was prepared for war. When Italian forces entered NW Greece, they met fierce and unexpected resistance.

Pindos was a rough, wild terrain made worse by the onset of winter.  As Italian troops moved southward towards the city of Ioanina, Greek troops took to the heights, bombarding the Italians from above. The rough roads and the deep snow made troops supplies difficult, the bad weather and the continuous cloudiness prohibited Italians form using their superior air force.

In six months, the Greek army had entered into South Albania.

Mussolini launched a counter attack with the aid of  German troops that had invaded Yugoslavia. the Greek resistance to Axis forces delayed the German attack against Russia.

Despite the heroic fight of the Greek troops the battle was uneven. It was a matter of time for the Axis forces to occupy Greece and raise the swastika over the Acropolis. 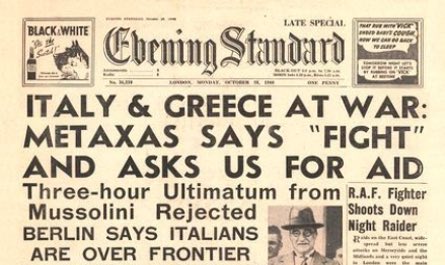 Paying homage to the Greek resistance Winston Churchill reportedly said “…until now we would say that the Greeks fight like heroes. From now on we will say that heroes fight like Greeks.”

In a highly symbolic move, Italian President Sergio Mattarella attend the military parade in Thessaloniki. He came for one-day visit to Greece following an invitation by counterpart Prokopis Pavlopoulos. According to media, the Italian President will officially apologize for declaring the war.

The “national voice of Greece through the Greek-Italian War: Sofia Vempo “Children of Greece”

* unfortunately I cannot give credit to the unknown artist of thumnnail picture.