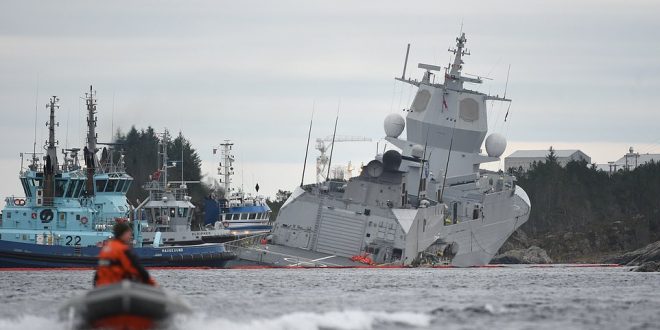 The crew on board of the Norwegian frigate KNM Helge Ingstad  have ignored multiple warnings sent not only by the Greek-owned tanker Sola but also by maritime traffic authorities based at nearby Fedje, local media report. The frigate responded at least once to the warnings, claiming they “had control.” They did not.

The frigate was returning to Norway after the NATO exercise Trident, where it even had taken part in “high visibility” training.

The crew on board the Norwegian frigate that collided with a tanker early Thursday was reportedly warned several times that it was on a possible collision course. Crews on some vessels in the area, meanwhile, have reported that the frigate was not visible on their radar, and instead loomed like “a big dark shadow.”

The Norwegian news site aldrimer.no, which specializes in critical coverage of military and defense issues, reported that the crew on board the ill-fated frigate KNM Helge Ingstad responded at least once to the warnings, claiming they “had control.”

They apparently did not.

The expensive warship that was returning from successful NATO exercises, where it even had taken part in “high visibility” training, ended up colliding with a fully laden tanker escorted by a tug boat and with a pilot on board.

Defense officials reported Friday morning that the frigate, now lying on its starboard side with a large gash in its hull, remained stable during the night. It’s literally been bolted to the rock on which it’s lying to prevent it from sinking and improve salvage prospects.

All 137 of those on board the tanker when the collision occurred remain gathered at the frigate’s home port at Haakonsvern in Bergen. They’ve so far been shielded from the media, while naval officials have refused to answer questions about how such a collision could have occurred. They claim they want to leave that to the state accident investigation board (Statens havarikommisjon), while noting that additional probes are also underway by local police and other authorities.

Warnings issued
On Friday morning, however, aldrimer.no reported that the crew of the tanker Sola had “called up” the frigate several times, as had maritime traffic authorities based at nearby Fedje. They warned that the Helge Ingstad was on a possible collision course, but the warnings don’t seem to have been taken seriously.

“We have several good sources who are centrally placed,” the news site’s editor Kjetil Stormark told Norwegian Broadcasting (NRK) on Friday. Stormark claims that they have related, independently of one another, what was said in radio communication between the tanker and the frigate, and between the marine traffic authorities and the frigate. 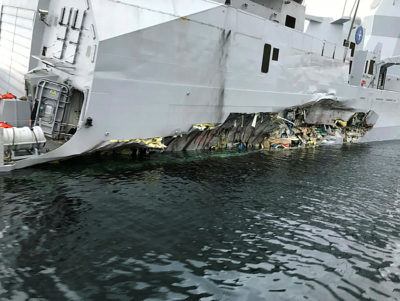 The frigate sustained severe damage in the collision including this gash, estimated to be nearly 10 meters long. PHOTO: KV Bergen/Forsvaret

The news site, named after the saying that Norway should “aldri mer (never again)” be subject to an invasion as it was in 1940, further reported that the frigate responded at least once that it “had control.”

Stormark said aldrimer.no’s sources requested anonymity because of the ongoing official investigations in the collision.

Neither defense officials nor the Norwegian Coast Guard would comment on what happened in the time before the crash, which occurred shortly after 4am Thursday.

The marine traffic center at Fedje, however, confirmed to aldrimer.no that all vessels in the area that’s home to the large Sture oil terminal must report their positions, and report their arrival at least an hour before entering. The rules for the area along Norway’s West Coast, called Øygarden because of all its islands (øy), apply to both military and civilian vessels.

Regulations also call for all vessels to listen to VHF channel 80 to communicate with other vessels. That appears to have been especially important on Thursday, after crews on board other vessels in the area have reported that the frigate was not visible on their radar. Nor was it visible on the popular Marine Traffic system that tracks and identifies vessels: Helge Ingstad popped up only after the collision occurred, and was then identified as a “NATO Warship.”

Probes making progress
Both the police and the state accident investigation board are now charged with officially establishing the cause of the collision, and explain how a modern frigate, loaded with high-tech equipment that’s supposed to be capable of tracking all movement around it including submarines, could possibly have failed to notice an oil tanker heading into its starboard (right) side. Some maritime officials including a retire naval commander  have also noted that the frigate should have yielded to any traffic coming from the right.

The area around the Sture oil terminal is also monitored day and night. While the frigate is itself designed to be difficult to see, it should have seen all other vessels around it. The collision forced temporary closure of the terminal on Thursday, which in turn halted production at several offshore oil fields that deliver to Sture. Financial claims for losses generated by the collision were therefore likely to mount. (newsinenglishnorway)