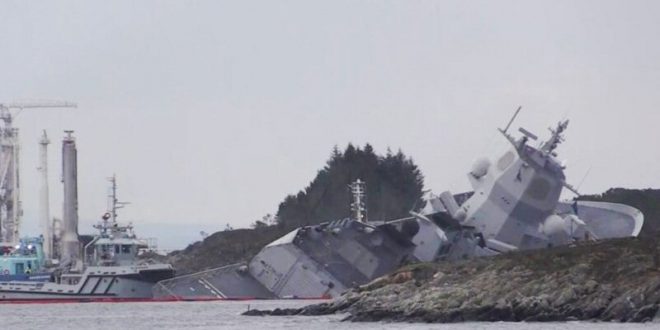 November 8, 2018 Economy Comments Off on Norwegian frigate at risk of sinking after collision with Greek-owned tanker (videos) 367 Views

A race against time is underway in the North Sea with huge efforts to prevent a Norwegian frigate from sinking. A Greek-owned crude oil tanker collided with frigate KNM Helge Ingstad off Norway last night.

The KNM Helge Ingstad was returning from the NATO exercise Trident while the tanker Sola TS had just departed Equinor’s Sture oil terminal with a cargo of North Sea crude when the accident took place in calm waters.

The frigate quickly took on water, all 137 crew members were evacuated and eight people were treated for slight injuries.

The accident took place shortly after 4:00 am (0300 GMT) in a busy waterway in the Hjeltefjord near Bergen, Norway’s army said.

Images of the frigate published online and broadcast on television showed the frigate was partly underwater and had been moved near the shore.

No oil spill has been detected in the sea area where the collision took place in a fjord north of Bergen.

Oh jeez, daylight photo by Eirik Brekke shows extent of damage to the Norwegian Aegis frigate #HelgeIngstad after collision with oil tanker #Sola, in fjord north of Bergen. She was returning from #TridentJuncture2018. Was driven aground to prevent sinking. pic.twitter.com/x58huixr3w

The 62,000-tonne tanker, which was flying the Maltese flag, was only slightly damaged and none of the 23 people on board were injured, the rescue centre said. It was waiting to be towed to a nearby oil terminal.

According to the Norwegian Coastal Administration, a 10-cubic metre helicopter fuel tank on the frigate was ruptured.

“The leaked amount has not been determined,” it said.

Tug boats were being used to drag the ship towards the shoreline, in an effort to keep it from sinking in the deep, busy waterway.

The cause of the collision is still to be determined.

Norway’s Accident Investigation Board has launched an investigation into the collision, which also involved a tugboat.

The cause of the collision is still to be determined.